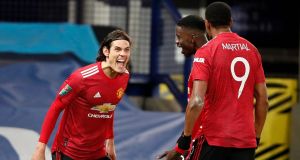 Ole Gunnar Solskjær has said Edinson Cavani can expect to exert more influence at Manchester United and “probably start more matches than he does not start”, hailing the 33-year-old as “one of the fittest players we have”. The manager even hinted at the possibility of Cavani staying at the club beyond the term of his current contract.

Cavani has made 13 appearances for United – four as a starter – since joining on October’s transfer deadline day. His contribution goes far beyond the four goals he has struck in that time, with the latest demonstration of his class coming at Leicester on St Stephen’s Day when he replaced Anthony Martial with 15 minutes to go and set up a goal for Bruno Fernandes.

Asked whether he regards Cavani as a starter or as an impact substitute, Solskjær replied: “He is definitely a starter. You don’t classify a player of that quality as anything else. We have plenty of starters. More than 11 starters and that is the thing when you are at Manchester United. You should believe in yourself and trust in yourself. I trust him. I trust my players. We have good competition for places and will probably start more games than he will not start.”

Cavani signed a one-year deal with United, with the option of another one, and the manager revealed the player was so determined to make his mark that he asked to wear the No 7 shirt, whose previous occupants include George Best, Eric Cantona, David Beckham and Cristiano Ronaldo.

“It is the first thing he asked me.” said Solskjær. “We told him about the history of the shirt and the history of his career and experience, his personality from our chat and what I had watched before. I had no doubt that he could handle the No 7 shirt. He is a meticulous professional. His habits and everything show you about why he has had the career he has had. He is still one of the fittest players we have got.”

Having rotated his squad by using 20 players in United’s past two matches, Solskjær must decide whether to start the Uruguayan for their next match, at home to Wolves on Tuesday. “We have to [rotate] this way. It is also good for the players knowing that we do trust them playing big games. This period – or this season – everyone will have to contribute. It is going to be relentless so I hope it stands us in good stead.”

Solskjær also praised Harry Maguire for regaining his form after a wobbly few weeks early in the season iafter the defender’s conviction for assault in Greece. Maguire faces a retrial as he appeals against that conviction.

“Harry is a strong character and a very good player. He has led from the back. He has really been putting himself forward, always wanting to play and never wanting a rest. He has really improved throughout the season. We can see more and more leadership and more maturity.

“He is such a good human being and is in there leading the dressing room. He is humble, hard-working and knows when he has to hold his hands up. He has really gone out there and been a leader . In the dressing room as well.