Solskjær is restoring the ‘United way’ of the Ferguson era 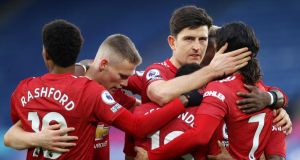 These are some of the reasons Manchester United stand level on 33 points with the leaders, Liverpool, and firmly in the title race, as close to the top as they have been after 16 games since Sir Alex Ferguson retired in May 2013. Then the great Scot guided the club to their 20th league championship. In the seasons since, the closest any United side has been to the leaders at this stage is six points, the deficit of Louis van Gaal’s team to Leicester in 2015-16.

Now there is real hope among United supporters that their team may finally be over Ferguson’s departure, that the glaring fault-lines seen under David Moyes, Van Gaal and José Mourinho have been replaced by deep-lying foundations under Solskjær. An edifice based on two fundamentals of every successful team: elite-level recruitment and an unbending ethic of togetherness.

This last element is key. Restoring club morale and the “United way” was the Norwegian’s point of departure upon replacing Mourinho in December 2018 and dividends are being yielded this season. This occurred even before this Covid-affected campaign began when Solskjær smartly handled the fallout of Maguire’s arrest, imprisonment and guilty verdict in a Greek court for aggravated assault, resisting arrest and attempted bribery. While the defender protested innocence and launched an appeal, his manager stood squarely by him and continued to do so when Maguire’s early-season form was shaky.

This was a vital call from Solskjær, a message of unity heard clearly by the rest of the squad, and Maguire’s own response is to have hit peak form. The centre-back will always struggle against pace and be prone to moments of clumsiness, but his quiet leadership deserves recognition.

Rashford’s elevation is more subtle. He ended last season with a career-best 22 goals and is again flying in the scoring chart with 14. But noticeable this season is how he has become more ruthless. Since breaking into the side under van Gaal in February 2016, the forward had been guilty of finding cul-de-sacs and ceding possession. Now, Rashford’s game-management is reminiscent of Wayne Rooney’s: each time he receives the ball there is heightened expectation. At 23, he promises to be a long-lasting asset for United.

As with Henderson, Telles’s arrival in the summer has given Solskjær an extra option. The Brazilian’s attacking thrust and delivery from left-back is more potent than Shaw, who is the more robust defender. Again, competition drives them on. At right-back, Wan-Bissaka’s reluctance to rove forward and cross may be a touch exaggerated by some, yet it did feel like a collector’s item when he fired in a ball for Anthony Martial’s opener in the 2-1 win against Aston Villa on Friday.

Wan-Bissaka is 23 and, like Rashford, is improving under Solskjær’s calm approach. At 33, Cavani requires no outside motivation. The Uruguayan is a fiercely driven footballer whose free acquisition appears the bargain of the season, and is more evidence of Solskjær’s ability to match Jürgen Klopp and Pep Guardiola in recruiting players who not only elevate the team but fit the mode of play – something Moyes, van Gaal and Mourinho all struggled to do.

Klopp and Guardiola also improve footballers. Into this category falls McTominay, who due to Solskjær’s nurturing has a credible claim to be first-choice and whose two strikes in the opening three minutes in the 6-2 hammering of Leeds were the headline moments of a dynamic box-to-box display. His and Fred’s emergence as a midfield pairing trusted by Solskjær has meant Pogba is no longer an automatic choice. Again, the Norwegian’s man-management of the Frenchman has been smart – keeping him onside despite the outburst from his agent, Mino Raiola, that Pogba’s United career will end this season. The 27-year-old has since impressed, most recently in an effervescent performance against Villa in which he helped to create Martial’s goal and claimed the winning penalty for Fernandes.

The latter, of course, is Solskjær’s jewel, his arrival the moment United began a skyward trajectory that led to them finishing third last season and, now, second and level on points with Liverpool as 2021 begins. The 26-year-old, who is top-scorer with 15, is United’s totem, good enough for Paul Scholes to rate him an even better than . . . Paul Scholes.

For Fernandes’s signing and the rest of his work, Solskjær deserves credit. It has not been easy. Yet a key question lingers: can United maintain their challenge all the way to May? This is a team who can be skittish in defence and who clearly are not yet in Liverpool’s class.

On January 17th, United visit Anfield: draw with or even defeat the champions on their own patch, and confidence will rocket. Now comes a defining time for Solskjær and his side.