Solskjær identifies Pogba and Rashford as players to build team around

The manager is hoping to add defeat of Liverpool to those of Tottenham, Arsenal and Chelsea 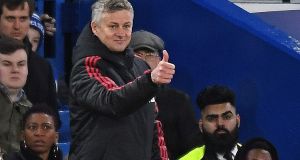 Ole Gunnar Solskjær believes if Manchester United beat Liverpool at Old Trafford on Sunday it will be another step towards making his side one “worthy of club history”.

The interim-manager has won 11 of his 13 games in charge, losing just once, to Paris Saint-Germain in last week’s Champions League last-16 first leg. Three of those victories were at Tottenham, Arsenal and Chelsea, moreover.

Solskjær said that if United could defeat Jürgen Klopp’s side, who are second in the table, it would represent progress in his attempt to elevate the side.

“We want to build this team to be worthy of Manchester United history and it’s another step [defeating Liverpool],” he said. “Tottenham, Arsenal, Chelsea away – it was fantastic to win those three games. We want to be in the top four at the end of the season, and we’re playing Liverpool. We know how big that game is for Manchester United, the staff, supporters. We’re just looking forward to another challenge for this team.

“We’ve taken a few steps in the right direction in that process of becoming a team that challenges higher up the league.”

Solskjær identified Paul Pogba and Marcus Rashford as players the side can be built around.

“They’re young enough to stay here for many years but you’ve got [Nemanja] Matic and [Ander] Herrera that makes Paul’s job what it is – you need to complement each other. “You can’t put 11 [Cristiano] Ronaldos or 11 [Lionel]Messis on the pitch and expect to win.”

Solskjær wants United to learn from the 2-0 loss to Paris Saint-Germain.

“We were confident going into it, humble to know PSG are a fantastic team,” he said. “But it hurt, and how the players responded was fantastic [at Chelsea] and maybe it’s natural. Jesse Lingard, Marcus, Luke Shaw hadn’t played a big Champions League game at Old Trafford before – that’s something they have to learn from.”

Solskjær would not be drawn on specifics regarding how Liverpool can be beaten.

“I wouldn’t tell anyone, would I? We have to perform better than we did against PSG, because it’s a big game, a big team… suddenly we’re not underdogs any more. We need to learn from PSG.

“PSG man-marked Paul Pogba – if Liverpool do he will have experienced that [before]. PSG stopped Paul and created space for others. We know we’re in for a very tough game. Liverpool have been fantastic, and will know as well to come to Old Trafford it should be a difficult one. They pay us respect, and we’ll pay them respect.”

United should have Anthony Martial back from a groin injury, though Lingard’s slower recovery from a hamstring problem means his availability is in the balance.

“I hope Jesse will be okay – more hope than think,” Solskjær said. “Anthony will be okay. We still hope Jesse could be ready. Let’s see. We’ve still got a couple of days’ training left and they need to be part of it.”