Solskjær hits back at Van Persie for criticising his management style

‘He took my number 20 shirt and that’s probably all he’s going to take from me.’ 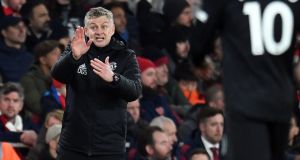 Ole Gunnar Solskjær has rounded on Robin van Persie by saying the former Manchester United striker took his shirt at the club but will not take anything away from his management style.

Van Persie had criticised Solskjær for smiling after Wednesday’s 2-0 defeat at Arsenal, saying: “I would like to see him more mean at times, just be angry. I see him smiling after a game like that. This is not the moment to smile.”

Van Persie and Solskjær wore the same shirt number during their playing careers at United and the manager was visibly upset when asked about Van Persie’s comments.

“I don’t know Robin and Robin doesn’t know me,” he said. “He probably doesn’t have a right to criticise my management style and I won’t change. That’s definite. He took my number 20 shirt and that’s probably all he’s going to take from me because I’m not in medieval times [so don’t need to have an angry modus operandi].”

Solskjær also had no patience for Mino Raiola after Paul Pogba’s agent said United would ruin the career of Diego Maradona and Pelé if they joined the club now and that the unsettled midfielder needs to play for a side like his previous one, Juventus.

Asked if Raiola should disrespect clubs like that Solskjær said: “No. I can speak to Paul Pogba about it. I don’t think I should be talking to agents or about agents that talk about us but Paul is our player. It’s not ‘agents’ players’ it’s ‘our players’. What me and Paul are talking about I don’t have to talk to you about. That will be between us.”

Pogba’s future at United is continually doubted by fans yet Solskjær does not think he should make a public statement. “Paul is very committed to coming back, playing well for us, and it’s hard when you’re injured to go and talk about all sorts,” he said. “His talking needs to be when he comes back on the pitch. The most important thing is that we get him fit.”

“They probably know the reasons for not performing. I had Alexis here so I can talk about Alexis. He has had a few injuries and when you get injuries you’re not going to be able to showcase your qualities.”

Pogba’s new ankle problem has ruled him out for four weeks, while fellow midfielder Scott McTominay’s knee injury means he is unavailable for two months. This leaves Solskjær with only Fred and Nemanja Matic as front-line players in the position. United play Wolves at Molineux in the FA Cup on Saturday and the EFL Cup semi-final at home against Manchester City on Tuesday in a crucial four days.

“It’s a big blow,” he said. “You could probably handle and deal with three players rotating [but we’ve got] two fit with Matic and Fred – it will be a hard task for them. We will just have to ask them to keep going if they can.

“We just have to find a way, that’s the thing. We will have to find different positions for someone. Tim Fosu-Mensah is capable of playing there when he comes back. Andreas Pereira has played a couple of games in there and not let us down in there. He’s an option, too.”

Regarding Pogba’s problem, Solskjær said: “It’s some bone fragments – not a big, massive injury. It will keep him out for a while.”

The manager was asked if Pogba might have been able to play on until the start of next month because United have 16 clear days owing to the winter break.

“It wouldn’t be fair to risk any player’s health. If the player is not happy with what he’s feeling – he’s got loads of pain – then it might be a worry that it can get worse.”

The midfield crisis has ended any possibility of Matic, who has lost his starting berth, leaving this month. “Nemanja will stay. He’s been working hard to get back in and now he’s here and he’s playing well,” said Solskjær, who added that Matic could yet earn a new deal. “There’s always a chance of that.” – Guardian