Solskjær hints at United signings with Pogba and McTominay out 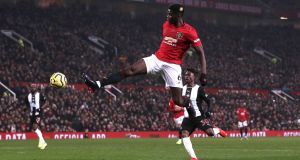 Paul Pogba needs surgery to address his long-standing foot problem and although it is “nothing major” according to Ole Gunnar Solskjær, it needs to be done as soon as possible and will rule him out for three or four weeks.

Speaking after Manchester United’s 2-0 defeat to Arsenal, Solskjær said Pogba had been “advised to have an operation by his people,” which sounded a little curious. But United said their medics had conducted the scans first, confirmed the diagnosis and were in agreement with Pogba’s personal specialist.

“It is something that has to be sorted ... within a timeframe,” Solskjær said. “He has been advised to do it as soon as, and he will probably do it as soon as. He will be out for three or four weeks probably. We look after our players’ health and we are not going to take any risk with any players who don’t feel that they are able to play on.”

Solskjær also reported that Scott McTominay will be out for “a few months” with a knee ligament injury, increasing the imperative for the club to move in the January window. “Of course it is playing on our decision-making [in January] when you have got two players out,” Solskjær said. “If it’s possible we will do something. We are looking at one or two.”

Mikel Arteta, who celebrated a first win as Arsenal manager, said that Granit Xhaka, who has been stripped of the club captaincy after clashing with some of the club’s fans and has been heavily tipped for a January transfer, will remain at the Emirates.

“I think he will stay,” Arteta said. “Did he give me that assurance? He did, yes. I really like him. He knows the way we want to play. We need to get him on board and he can be a tremendous player for this football club.” – Guardian