Solskjær has seen positives at United but also basic errors 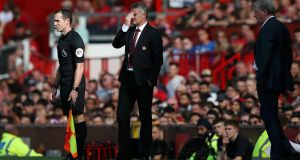 After three matches of the new season there is a sense Manchester United must start killing opponents off or risk confidence dissipating as performances and results flat-line. The report card for United’s opening 270 minutes of 2019-20 reads: promising yet concerning. Ole Gunnar Solskjær knows his first full season in charge will be bumpy and in the 4-0 victory over Chelsea, the disappointing draw at Wolves, and Saturday’s frustrating home defeat by Crystal Palace he has been proved correct.

Already, Solskjær has to rally his players and turn results around due to the past two outings in which United dominated but failed to win, dropped five points, and so have four instead of a maximum nine.

“We have to learn quickly,” Solskjær said after Palace had triumphed via Jordan Ayew’s first-half opener and Patrick van Aanholt’s 92nd-minute winner. In between was a late Daniel James equaliser and a tale of a ragged United who could have been awarded more penalties by Paul Tierney, and missed the one he did grant, with Marcus Rashford hitting a post, for which he later received despicable racial abuse on Twitter.

What Solskjær posits is easy to say, far harder to do: grow up quick, become a streetwise side who take the chances spurned against Wolves and Palace while eradicating errors, such as Victor Lindelöf allowing Jeffrey Schlupp to out-jump him, and his centre-back partner, Harry Maguire, slumbering as Ayew put the Eagles ahead at Old Trafford in a league game for the first time since 1979.

On the plus side for United, though, is a discernible pressing, passing style, and the varying success of Solskjær’s three summer signings. James, who joined for £15m, has enjoyed the brightest start. The strike against Palace came near the end of a contest in which the 21-year old tormented the visitors and having also scored against Chelsea on debut and prospered in passages at Molineux his beginnings augur well.

Aaron Wan-Bissaka, a £45m purchase, has impressed too. Versus Chelsea, Wolves and Palace the right-back illustrated that Solskjær has added a player who is difficult to attack and who has verve when roving forward. As an England defender who cost a world-record £80m, Maguire is the surprise: the least convincing so far - at fault, in part, for Palace’s opener and also shaky in moments against Chelsea. Yet he, too, is bedding in and his class will surely emerge.

There are question marks elsewhere. In midfield Paul Pogba has the look of man bemused at Solskjær’s failure to acquire a top class addition to partner him.

If Pogba misfires or needs a rest there is no Ilkay Gündogan, Rodri, Fernandinho, David or Bernardo Silva to take over as Kevin De Bruyne has at Manchester City. The hope is Scott McTominay will prove to be near Rodri’s or Fernandinho’s class as a holding player but this is a big task and one of the intangibles that place Solskjær’s United at their current crossroads.

Another unknown is in attack: there were only three attempts on target on Saturday - the same number as Palace managed. A lack of goals has been the glaring problem since Sir Alex Ferguson left in 2013. Totals of 64, 62, 49, 54, 68 and 65 are their league returns since. Solskjær has already lost Romelu Lukaku, the top scorer of the past two seasons, and if Alexis Sánchez goes to Internazionale, this will further reduce competition for Rashford and Anthony Martial. There is also the question of back-up: Martial is a doubt for Saturday’s trip to Southampton because of injury.

By mid-October, all will be clearer. After games against Southampton, Leicester, West Ham, Arsenal, Newcastle and Liverpool, the question of which direction United are heading should have an answer. Solskjær is a determinedly positive manager. But, as he says, his side have to begin to mature – and soon. – Guardian