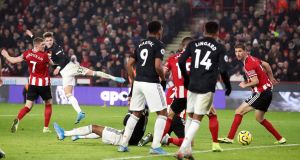 Ole Gunnar Solskjær conceded his young Manchester United team were “very, very poor” for 70 minutes at Sheffield United yesterday but maintained their late fight back to secure a 3-3 draw highlighted his players’ progress from last season.

“It was a very, very poor performance,” said Manchester United’s manager, whose side were 2-0 down at Bramall Lane until three late goals in seven minutes from Brandon Williams, Mason Greenwood and Marcus Rashford briefly propelled them into an unlikely lead before Oli McBurnie’s last-gasp leveller for Chris Wilder’s side.

“We did play badly first half, we didn’t win any challenges, we weren’t first to the ball, we didn’t stick to what we had planned. I could have changed all the players at half-time, except David [de Gea], as he kept us in it. But we turned it round.”

With the former Tottenham manager Mauricio Pochettino newly back on the job market, Solskjær – whose side sit ninth in the Premier League, a point behind sixth-placed Sheffield United – was perhaps understandably keen to talk up this new-found refusal to surrender.

“The massive difference between this season and last year is that last year we did give up, this year we don’t,” he said. I’m thinking back to Everton last season – that team gave up and this team didn’t. So when we turned it around it’s a great response to get from the boys.

“Even though the big part of this game was very negative and we’re annoyed, we did have the character to stick in and turn it round. That was great. We’re disappointed we didn’t win at the end. The boys will have learnt a lesson but they had the character to stay in the game.”

“You must remember that these players are young. The first goal gave them belief. I don’t doubt them wanting to win. Sometimes young players don’t really know how to win challenges like this and we must have learned a lot today. I’m sure we have.”

Wilder was sanguine after seeing his side shine while leading through goals from John Fleck and the excellent Lys Mousset.

“Unfortunately it’s a 90-minute rather than 71-minute game,” said Sheffield United’s manager. “We just dropped our energy levels at the wrong time; 2-0 is a dangerous scoreline. And you’ve got understand the quality you’re up against in this division.

“And you’ve got to give them credit, just as you have us with the way we fought ourselves back at the death to get ourselves something out of the game. It just flicked a switch for them when they got back into the game at 2-1, with what, from our point of view, is a goal out of nothing.

“I would have been really disappointed had we not got anything from this game because for the majority of the time we were right up there in terms of the performance levels.” – Guardian