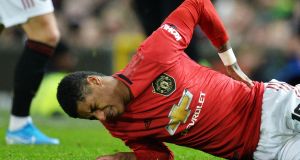 Marcus Rashford went off with a stress fracture to his back during the FA Cup replay win over Wolverhampton Wanderers. Photo: Peter Powell/EPA

Ole Gunnar Solskjær has offered no guarantee that Marcus Rashford will play again this season and be ready for Euro 2020.

Manchester United’s manager said yesterday the striker would be out for “a few months” with a double stress fracture to his back but would not require surgery. Solskjær said on Sunday such an injury usually required six weeks to heal, followed by rehabilitation. When it was put to him on Tuesday that there was concern Rashford could be out until next season, he provided no assurances on a timescale.

“Marcus is going to get as long as he needs to get fit,” Solskjær said. “I have got the best medical staff in the country and I am sure when Marcus comes back he will be 100 per cent.”

Solskjær admitted the challenge was to prevent Rashford’s absence from derailing United’s season. “[That’s] the million-dollar question for us because Marcus has been fantastic,” he said. “Someone’s got to step up. If we find something in the transfer market, that might be one solution. We are looking at different scenarios. We know Marcus is out for a few months. But the best solution is players stepping up.”

It was put to Solskjær that when Romelu Lukaku, United’s top scorer of the past two seasons, left in summer he should have been replaced to plan for an eventuality such as Rashford’s injury.

“Of course but we are planning [all the time] ,” he said. “We knew we were a forward light when Romelu went and Alexis [Sánchez] went, but you’ll not see Anthony, Marcus and Mason [Greenwood] do as well as they’ve done unless you give them the chance. Harry Hindsight – he’s quite clever.”

Solskjær also defended his handling of Rashford, who suffered the injury against Wolves in the FA Cup.

“I never put myself before the team,” he said. “With Marcus, he’s had minor discomfort in his back since the Burnley game [on December 28th]. We’ve had scans, we’ve monitored him. There’s not been any injury there.

“He’s had complaints, yes. I had a discussion and conversation with him the day before or two days before [Wolves last week]. I said: ‘FA Cup, I’m going to rest you.’ He felt fine. He was very adamant that if needed he could do half an hour because we want to go through in the Cup because it’s a big tournament for us. That shows you Marcus’s attitude.”

When Rashford came on against Wolves he suffered the fracture but Solskjær said: “You know we monitor and take risks – not risks, we have to manage players every single day, loads of things that Ian Wright or anyone doesn’t know about.”

United lost 2-0 at Liverpool on Sunday in Rashford’s absence but Solskjær was positive when reflecting on the game. “For me we lost to Liverpool, a team that you all say are fantastic, and we’ve been in the game until the last kick,” he said. “And, for me, that’s strides forward. We’re disappointed losing the game, we don’t want to be behind them but there were signs that we are on the right track.” – Guradian