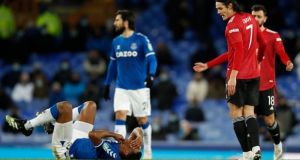 Ole Gunnar Solskjær dismissed suggestions that Edinson Cavani could have been sent off after his United side set up a Manchester derby in the semi-final of the Carabao Cup.

The Uruguay international was involved in an ugly incident with Yerry Mina in the second half when he appeared to grab the defender by the throat. The referee Andy Madley, however, did not have the benefit of VAR and so Cavani escaped further scrutiny before going on to score the pivotal first goal at Goodison Park.

Anthony Martial added a late second and United’s reward for the 2-0 win was a home semi-final against Manchester City. Of the Cavani incident, Solskjær said: “It’s two South Americans who have had a few battles before, not long ago when they met in qualifications. This was a proper game of football, with fans, tackles, yellow cards, I enjoyed it.”

The Manchester derby is a repeat of last year’s two-legged semi-final, in which City prevailed on aggregate despite losing the second match. This year the tie will be a one-off affair at Old Trafford as United were first out of the hat.

“We know that when we defend well we have players to win us the game, spirit in camp is good, winning gives energy and gives you a boost so we head into Boxing Day positive,” added Solskjær.

“A semi-final is sometimes worse than the final because it’s the worst possible time to lose a game and go out of the competition.”

Carlo Ancelotti was left to reflect on a frustrating night, marred by a incident where Richarlison was forced off with a head injury after being sandwiched between Eric Bailly and Bruno Fernandes. Richarlison appeared to suffer concussion and was led away by the medical staff.

“I think it was an unfortunate challenge, dangerous yes but I think all the players are at risk,” said the Everton manager. “Our doctor had total control of the situation and decided to take him out and I was in total agreement with him. We are going to check on him in the next few days to see what is going on. Fortunately he was OK after the game.

“We are disappointed it was an important competition for us. We have no regrets because the team performed.”

Spurs will host Brentford in the other semi-final. The Bees have already beaten four Premier League sides in Southampton, West Brom, Fulham and Newcastle. – Guardian