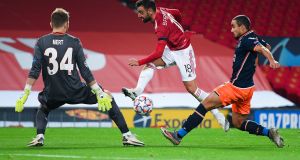 Ole Gunnar Solskjær believes Bruno Fernandes’s impact on Manchester United is as great as Cristiano Ronaldo’s was during his six years at the club.

Fernandes’s two goals in Tuesday’s 4-1 win over Istanbul Basaksehir took him to nine in 13 games for United this season. Since joining in January, Fernandes has been involved in 34 goals in 35 games – scoring 21 of these and making 13 assists – 16 more than any teammate.

Ronaldo is United’s greatest player of the Premier League era, the forward scoring 118 times in 292 appearances and helping the club to three titles, one Champions League, the Club World Club, FA Cup and two League Cups.

In 2008 he became the first United player since George Best in 1968 to win the Ballon d’Or, following this in January 2009 with the World Player of the Year award.

Solskjær was asked whether Fernandes is having the same impact on United as Ronaldo.

“He does definitely have that presence,” said the manager. “He has that influence and impact on his teammates. We can just look at the results since he’s come in. He’s got lots of energy, leadership; he’s a team player, which is a key here now for us going forward.

“Some players will have to sit games out and rest. I wasn’t looking forward to telling Bruno that he was resting against Leipzig [for last month’s 5-0 Champions League win], but it was absolutely no problem. Same with Marcus [Rashford, who came on to score a quickfire hat-trick], to be fair.

“Because they know this season is challenging and that’s how we build this team and the culture of the team. It’s about the team and not individuals. Bruno has proven that, over and over, that it’s a team before I.”