Solskjær backs de Gea to continue for another decade 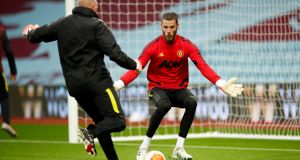 David de Gea is set to make his 400th Manchester United appearance on Monday against Southampton, with Ole Gunnar Solskjær believing the 29-year-old could play at least another decade for the club.

The goalkeeper was signed by Alex Ferguson in the summer of 2011 and has since won every domestic trophy and the Europa League, and been voted as the fans’ player of the year four times. Yet Solskjær believes the Spaniard remains hungry.

“He has been fantastic David – since I have been here I have enjoyed working with him,” Solskjær said. “He has come out and said that he wants to play many, many more – maybe 10 more years.

“How long he will be able to stay at the top is just up to him because it’s a pleasure to watch him being humble enough to work hard with coaches, Richard [Hartis] and Craig [Mawson], and the other goalkeepers.

“Four hundred games [will be] two more than Pete [Schmeichel] did. He’s won the Premier League, he’s won the FA Cup, the Europa League, the League Cup, but that is probably not enough for him.

“I don’t think he will be happy until he wins [more of the] bigger trophies. Staying at Manchester United in this time and not having one more [major one], I think that’s something that he will feel is a black dot in his career. Yeah, he’s won his personal awards. I don’t think David is that type who cares about personal awards, he wants the team to lift the big ones as well.”

De Gea endured a dramatic loss of form in the latter phase of last season but Solskjær insists he never lost faith in his keeper. “It did not cross my mind for one second [to drop him]– not at all,” said the manager. “To be a Man United goalkeeper you have to have a strong mentality. David has a strong mentality and to be coming up to 400 games: you don’t do that by being afraid of the limelight or being afraid of Old Trafford. You do that by walking out on to that pitch and showing them your quality and mentality.”

Marcus Rashford and Anthony Martial have each scored 20 times this season while the 18-year-old Mason Greenwood has 16. Solskjær likened the attacking trio to a particularly successful one that operated under Sir Alex Ferguson. “It’s not new for United,” he said. “Did you not watch [Wayne] Rooney, [Cristiano] Ronaldo and [Carlos] Tevez when they were playing? Sir Alex gave them some freedom, but within a framework and structure.

Solskjær has eradicated what he called “tippy-tappy” football. “There has been too much, last year – sometimes this year – from players who want to gravitate to the left, and go on there and play tippy-tappy football,” he said. “That is something we wanted to get rid of, and we have been more progressive and more disciplined in our positions.” – Guardian

Ballymun’s Dublin title one to savour for James McCarthy 06:00
Stuart Lancaster and Leinster ready to roll again at the RDS 06:00
Sporting Upsets: When Katie Taylor was stunned in Astana 06:00
Gerry Thornley: South African sides would be a welcome addition to Pro14 06:00
Europen Tour moves on to Scotland as the field remains thin 06:00

1 Gerry Thornley: South African sides would be a welcome addition to Pro14
2 Ballymun’s Dublin title one to savour for James McCarthy
3 The Offload: Springbok heavyweights heading for Pro14
4 Stuart Lancaster and Leinster ready to roll again at the RDS
5 Ken Early: Handball ‘crisis’ a timely distraction from the grim bigger picture
Real news has value SUBSCRIBE