Solskjær at the heart of Man United season ticket promotion 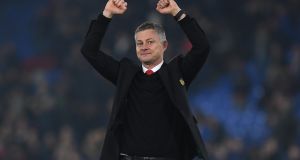 Manchester United interim manager Ole Gunnar Solskjaer: ‘I think my players see as well that I do enjoy this.’ Photograph: Mike Hewitt/Getty Images

Ole Gunnar Solskjær has revealed he filmed a promotion for next season’s Manchester United season tickets and admitted it would be “strange” not to be made permanent manager having done so.

The 46-year-old is in interim charge until the summer and is keen to continue beyond that. He is unbeaten in the Premier League going into today’s match at home to Southampton.

Asked whether it was strange to do promotional work, Solskjær said: “It’ll be stranger to see yourself in the video if you’re not here but no it’s not strange doing it. If my kids see a commercial with me in it and I’m back home in Norway that’ll be strange probably.”

That journey looks set to be without Antonio Valencia after Solskjær hinted that the right-back’s United career will end in the summer after 10 years. The club had a 5pm deadline yesterday to trigger a one-year extension on his contract.

Valencia became club captain last summer but has suffered an injury-blighted campaign, managing only one league start in the past five months. The 33-year-old has made 338 appearances for United since Sir Alex Ferguson signed him from Wigan Athletic in June 2009. If United do not trigger the clause they could still offer a fresh deal to Valencia, whose contract expires this summer, but Solskjær suggested it was unlikely.

“He’s still not 100 per cent fit, he is still working to get back fit and he’s had a fantastic career here at Man United and in England, ” the interim manager said. “He is one of the Premier League winners left in the dressingroom but at the moment I’m not sure if Man United and Antonio will agree on the next year.

“So it depends if he gets back on the pitch as well in the next few months but he’s the captain, a great servant to the club.”

Solskjær is intent that he and his players should embrace “squeaky bum time”, as his former manager Sir Alex Ferguson called the closing part of the season, as United enter the final phase in contention for a top-four finish, the Champions League and the FA Cup.

“I’m not a nervous guy,” Solskjær said. “I need to relax, I need to enjoy it. I think my players see as well that I do enjoy this. This is the best time of their lives playing here. These are the times Man United players step up, when the going gets tough. You sign up for challenges, you sign up to rise to those challenges when you’re at Man United. We’ve got Arsenal [on Sunday week] coming up, PSG away coming up, big games. These are the periods and times that make them stay in the history of the club.”