Solskjær admits spate of injuries is down to increased intensity

Norwegian: ‘If you want to be a part of Man United, it’s a survival of the fittest isn’t it?’ 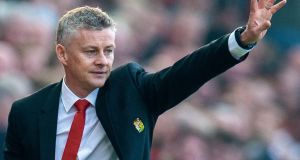 Ole Gunnar Solskjaer has a number of injuries ahead of Manchester United’s trip to Crystal Palace on Wednesday night. Photograph: Peter Powell/EPA

Ole Gunnar Solskjær has admitted Manchester United’s spate of muscle injuries is down to increased high-intensity work since he took over but says players have to respond because it is “survival of the fittest” at the club.

Juan Mata, Ander Herrera and Jesse Lingard are out with hamstring problems while Anthony Martial has a groin strain, Antonio Valencia a calf injury and Nemanja Matic an unspecified muscle issue.

When Solskjær took over from José Mourinho before Christmas United averaged 98 sprints per Premier League game. Under Solskjær that has risen to 108.6 a game.

“It’s probably linked, yes, because when do you make that change?” Solskjær said. “Do you wait until pre-season and think you will change results [for the remainder of this term] by just not asking them to run? Or do we start now and show them our demands regarding intensity and are how we want to play?

“And, of course you have seen what I have chosen. I have chosen that we need to play as a Man United team and if you want to be a part of Man Utd, it’s a survival of the fittest isn’t it?”

Herrera is 29, Mata 30 and Lingard 26 and Solskjær praised their lifestyle away from the club, citing this as vital to being in optimum condition.

“It’s about the preparation, the standards that you have to live up to on and off the pitch as a United player, and as a professional player in the Premier League,” Solskjær said.

“It’s not just turning up playing and training and then going home and doing all these little out-of-football activities that we have all seen too many footballers doing. I’m pleased with the way my lads have responded in that way - that we don’t see too much of them outside football.

With Marcus Rashford, who has an ankle injury, joining Martial, Lingard and Mata in missing today’s trip to Crystal Palace Solskjær believes now is the time for Alexis Sánchez and Romelu Lukaku to step up.

Solskjær is also without Herrera, Phil Jones, Matic, Antonio Valencia and Matteo Darmian in the first injury crisis of interim regime. The youngsters Angel Gomes, Tahith Chong, and James Garner are set to be part of the squad at Palace. “They’re ready, the kids,” the manager said.