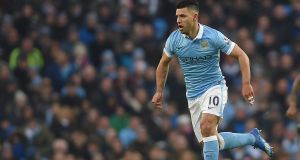 Sergio Agüero is certain that once he regains full fitness he will become even more prolific after scoring four times in his past five games following recent heel and knee injuries.

Last season Agüero collected 32 goals in all competitions for Manchester City. His 26 in the English Premier League won him the competition’s golden boot.

Manuel Pellegrini has praised Agüero’s contribution. “It’s always nice when your manager, or in fact anyone, speaks of you in a positive way,” Agüero said. “I’m happy to hear those words and it’s even better when it’s your manager. It’s all right him saying words but I have to back that up on the field to prove that what he’s saying is true.”

City are at West Ham United for today’s late kick-off. Agüero said: “West Ham are always a tough team to play against, especially on their own patch. We have a good side though and I think we have the quality in the squad enough to beat anybody. We’ve proved recently that we can get back to winning ways on the road again so if we could pick up three points on Saturday it would be a good time to go top [which City will if Leicester drop points against Stoke] and then be a little bit calmer and relaxed as the season progresses towards the final key period.

“It’s always an extra motivation for teams like West Ham when they’re playing against a team like City. It’s an extra way of motivating themselves going into the game if they believe they can beat us. They know that they’re playing against one of the top teams in the league. We have to be well prepared going into the game to try and avoid any unexpected defeats. It’s important that we keep on a good run and avoid dropping points between now and the end of the season.” Guardian service