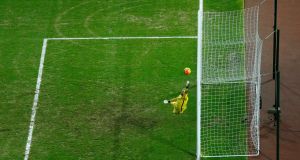 Sergio Agüero scored twice to rescue a point for stuttering Manchester City in a 2-2 draw at West Ham.

The title challengers twice fell behind to goals from Enner Valencia and needed Agüero to bale them out with a penalty and a late equaliser.

Valencia fired the Hammers into the lead after just 55 seconds, and put them back in front early in the second half with City’s defence suffering from brain fade again.

But Agüero came to the rescue to deny West Ham an unlikely double over City this season.

City’s defence has come under scrutiny this season and it failed its first test at Upton Park as West Ham scored with their opening attack.

Cheikhou Kouyate strode past a non-existent challenge from Yaya Toure and into the area before cutting the ball back for Valencia to slam under Joe Hart.

City almost hit straight back when Agüero got round the back of James Collins, his clever lob beating Hammers goalkeeper Adrian only to come back off the inside of the far post.

But moments later Agüero did haul the visitors level after he had been tripped in the area by Carl Jenkinson, coolly sending Adrian the wrong way from the penalty spot.

Right back Jenkinson’s evening came to an end moments later when he limped off injured, meaning a quicker-than-expected debut for new signing Sam Byram just three days after completing his switch from Leeds.

Yet despite having been gifted a route back into the game, City’s galaxy of stars were still being outshone by West Ham’s Dimitri Payet.

One clever reverse pass from the French playmaker sent Michail Antonio racing through, and Martin Demichelis earned himself a yellow card for halting the winger’s dart towards goal.

Payet stepped up to take the free-kick and his powerful, curling effort was destined for the top corner until Hart dived full-length to his left to pull off a world-class save.

After the break another sublime touch from Payet sent Mark Noble scampering to the byline before standing up a tempting cross to the far post which Antonio headed narrowly wide.

City were inches from taking the lead, against the run of play, in the 55th minute when Fabian Delph’s low shot hit the foot of Adrian’s post – and moments later West Ham went back in front.

Antonio’s quickly-taken throw-in, of all things, caught the City defence napping and Valencia brushed off Nicolas Otamendi’s feeble challenge before prodding the ball past Hart.

However, with 10 minutes remaining and West Ham defending deeper and deeper, City substitute Kelechi Iheanacho ran unchecked into the area. His shot rebounded into the path of Agüero who was able to steer the ball past Adrian.

Even then West Ham could have stolen the victory but Kouyate’s stoppage-time header from Noble’s free-kick clipped the crossbar, and City escaped with an unconvincing point.