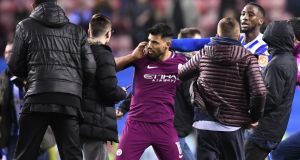 Sergio Aguero is surrounded by fans as he attempts to leave the pitch after the Emirates FA Cup fifth round match between Wigan Athletic and Manchester City at DW Stadium. Photo: Gareth Copley/Getty Images

Sergio Agüero believes he was told to “suck my d**k” and was spat at in his ear by the Wigan Athletic supporter who confronted him at the DW Stadium on Monday evening, with the striker now considering pressing charges for common assault.

Agüero met with Manchester City officials, including those from the legal department, on Tuesday to discuss his options and the Argentinean may yet make his disquiet official by lodging a complaint with the police.

The 29-year-old made contact with the fan following a pitch invasion which left him and his City team-mates vulnerable to a serious attack. City sources are dismayed at Wigan’s stewarding provisions for the FA Cup fifth-round defeat considering the Lancashire club knew there would be 4,000 travelling fans for what was a local derby and that the hosts expected their highest-attended match of the season. City believe the security presence was inadequate and ineffective, given what occurred following the final whistle.

City are studying footage provide to the club by the BBC and of that filmed by their fans in the away section.

Footage shared on social media shows City fans being continually goaded by Wigan fans with little or no action taken by the few stewards visible.

City are co-operating with a police investigation into the crowd disorder, which included their supporters throwing objects and ripping up advertising hoardings. The club will also seek an explanation from Wigan for the pitch invasion but the club have no plans to complain to the Football Association. The FA is assessing the situation, however, and could investigate Wigan for the encroachment, especially as there appeared to be little protection for both sets of players as home fans streamed on to the pitch.

The FA received the referee Anthony Taylor’s report on Tuesday and is studying this along with all available footage of the crowd trouble and of the tunnel dispute between Pep Guardiola and his Wigan counterpart, Paul Cook. The governing body may then seek observations from both clubs.

There were also problems on the pitch. City players surrounded Anthony Taylor after the referee appeared to change his mind and show Fabian Delph a red card for his challenge on Max Power shortly before half-time. Taylor had initially drawn a yellow card, and this caused Guardiola to remonstrate with Cook, a dispute that continue in the tunnel at half-time.

The Wigan chairman, David Sharpe, stated the club would conduct their own investigation. “The emotions of football can sometimes get the better of fans and that was evident last night,” he told BBC Breakfast. “I don't like to see what happened at the end of the game.”

John Maughan: This year's All-Ireland will be tainted, whoever wins it 06:45
Ken Early: Resurgent United can be the top team – in Manchester 06:46
TV View: Stunned silence as Serpentine wins a socially-distanced Derby 06:00
The Game Changers: How Jonah Lomu’s dramatic arrival heralded rugby’s new dawn 06:00
Bryson DeChambeau motors home with 65 to win in Detroit 06:52

1 Ken Early: Resurgent United can be the top team – in Manchester
2 The Game Changers: How Jonah Lomu’s dramatic arrival heralded rugby’s new dawn
3 John Maughan: This year's All-Ireland will be tainted, whoever wins it
4 Monica Seles: The warrior queen who could have been the best ever
5 IRFU in line for €75m windfall as CVC acquire 14.5% Six Nations stake
Real news has value SUBSCRIBE