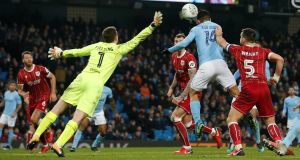 Manchester City had to fight throughout this semi-final first leg as they will surely have to do in the return game at Ashton Gate. That is in a fortnight and for Bristol City to still have a chance of reaching Wembley shows how fine a display this was.

Sergio Agüero may have broken Bristol City hearts with his headed winner in added time but given the talent at Pep Guardiola’s disposal, Lee Johnson and his players can feel rightly proud at losing only by the odd goal.

Guardiola selected a strong side. Agüero and Fernandinho dropped to the bench, while Nicolás Otamendi and David Silva were not in the 18. Yet Kevin De Bruyne, John Stones, Ilkay Gündogan, Leroy Sané and the club’s joint-top scorer Raheem Sterling, who has 18 goals this season, were included.

Johnson made one change from Bristol City’s last league game, Frank Fielding replacing Luke Steele as goalkeeper. This was their sixth tie in the competition, against their fifth Premier League opponents, having already dispatched Watford, Stoke City, Crystal Palace and Manchester United.

There were 7,680 travelling fans – a record at the venue – and they watched the home side come at their end almost instantly from kick-off. Bernardo Silva’s deft touch took him infield from his right-hand berth and the Championship side were relieved to clear. Fielding experienced the same emotion when Sané rolled a short corner to De Bruyne and the Belgian’s curled shot came close to beating the goalkeeper before he tipped over.

In Agüero’s absence Guardiola asked Sterling to operate at centre forward, a role he occupied with some accomplishment on occasion at Liverpool. The 23-year-old’s pace was evident when De Bruyne turned a ball around the corner into his path from behind halfway.

The contest flowed, with the visitors growing more confident. When De Bruyne swivelled near halfway he ran straight into Joe Bryan. Suddenly the home side were back-pedalling, the left winger racing to the penalty area’s edge before drawing a save from Claudio Bravo, the goalkeeper flinging himself right.

Johnson’s side, fourth in the Championship, were hardly overawed. Jamie Paterson, the number 10 , swept a pass to Josh Brownhill on a left-right diagonal. Oleksandr Zinchenko stamped on his toes and Anthony Taylor gave a free-kick. If this was a warning for City, they continued to have their own threats on Fielding’s goal.

De Bruyne hit a first-time pass into Sané and the German raced on and slid the ball along the line but it was scrambled clear. Sané and Silva were Guardiola’s brightest performers, the Portuguese’s touch and strength illustrating his club’s strength in depth as the former Monaco man is not yet a first choice.

Still, the home side could easily have fallen behind from a cleverly worked free-kick which had Bryan zipping in behind and finding Paterson, who should have finished. Shortly afterwards, though, calamitous home defending proved costly. Eliaquim Mangala was pick-pocketed by Brownhill, then Stones scythed down Bobby Reid in the penalty area. Taylor pointed to the spot, Guardiola wheeled away in disgust and up stepped Reid to give Bristol City the lead. Sterling almost equalised immediately with a lob at an apparently vacant net but Aden Flint made a fine clearing header over the bar to preserve the advantage.

Guardiola resisted making the obvious change of introducing Agüero for the second half’s start. Manchester City were now operating with a kind of floating number nine, with Sterling having swapped with Silva, who retreated to leave them flat at the front .

The sense with this Guardiola side is they can score at will. So far this term they virtually have. When Sterling came at Hordur Magnusson it appeared an equaliser was inevitable but a corner was conceded and Bristol City survived.

They emerged intact when Manchester City next marauded forward. Sané is the club’s quickest player and after he burned beyond the rearguard his left-foot shot disappointed. So, too, did Marlon Pack’s error that gave Sterling a clear run at goal. Yet when he let fly Fielding beat the ball away.

Bravo had been enduring a difficult evening with balls played from feet yet his pass that created the equaliser was impressive. It found De Bruyne and after swapping passes with Sterling the Belgian smashed home.

This was relief for City, who could be expected to lay siege on their visitors’ area from here until final whistle. Moments later Flint was lucky to escape with a yellow card when blocking De Bruyne’s path to goal.

The question was whether Guardiola’s men could put the tie to bed against a Bristol City determined to prevent this. On 70 minutes Guardiola did introduce Agüero. The manager’s preference was to save his sole fit striker for Sunday’s trip to Liverpool but the need to press for a second goal prevailed and it was the Argentinian who did the business, from a Silva cross.

Seconds later the whistle went and Guardiola was effuse in congratulating Johnson for his side’s effort. – Guardian service