Sergio Agüero brace gets Man City over the line at Bournemouth 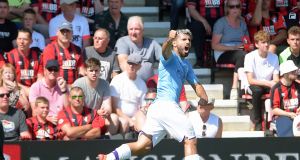 There were periods when this was awkward. Manchester City even looked flustered at times, stretched by Bournemouth’s urgency and admirable refusal to wilt. And yet Pep Guardiola’s side still negotiated passage to another victory with all the panache of seasoned champions and with David Silva, dwarfed by the home side’s central midfielders, untouchable at the heart of so much of their play. He retired at the end having barely broken into a sweat.

To thrill at so much of the attacking football this team can deliver is also to despair for virtually every other side in the division. It seemed almost unfair that City should force their way ahead here with a goal that owed something to fortune, Kevin De Bruyne scuffing his shot from Oleksandr Zinchenko’s centre only for the ball to fall kindly for Sergio Agüero to cushion and convert. There was more to admire at the build-up to their second – from Aymeric Laporte’s pinged cross-field ball to Bernardo Silva, then David Silva’s slipped pass for Raheem Sterling to score – as a goal which felt suitably majestic in its construction.

That David Silva should be so integral felt a reminder of what City will lose when he departs at the expiry of his contract next summer. This was his 400th appearance for the club, the first player to reach such a landmark at City since Paul Power. He may not have the energy of old, with the management and medical staff managing his schedule cannily, but few compare when he infiltrates that pocket of space in front of an opposition backline. There is no real quelling his threat. The Spaniard would be baffled at the non-award of a penalty after Jefferson Lerma stood on his foot on the hour-mark but, unperturbed, was soon wriggling into a crowded penalty area to panic Bournemouth once again. Agüero emerged from the clutter to ram in his side’s third and confirmed the victory.

Not that Bournemouth ever threatened to surrender meekly. They had been the more aggressive through the opening exchanges, their muscular energy disconcerting the visitors to the extent that Kyle Walker was sanctioned for the second of two crude fouls on Nathan Aké. Ederson, tearing out of his penalty area, would also earn a caution for clattering Callum Wilson while the contest was still goalless. That punishment might have been deemed lenient. Yet by the time the Brazilian blocked Adam Smith’s close-range attempt, after Nicolas Otamendi’s ill-judged decision to chest down on the edge of his six-yard box, the home side were playing catch-up.

Their approach had been disrupted by the loss of Charlie Daniels to what appeared another serious knee injury – the wing-back’s left leg buckling as he attempted to cross – with the ease at which City sliced them open to extend their advantage perhaps reflective of a team readjusting. Yet the substitute introduced for the stricken Daniels, Harry Wilson, would illuminate the occasion with a sublime free-kick in first-half stoppage time, whipping the ball over the wall and beyond the leaping Ederson via a flick from the angle of post and bar.

At least that offered Bournemouth hope and, briefly, momentum. Callum Wilson might even have forced them level after bursting beyond Aymeric Laporte, only for the defender’s slight touch to unsteady the striker and Ederson to conjure a smart save. The champions were stretched in that frantic period, reliant upon their goalkeeper’s punching from Ryan Fraser’s dangerous delivery, but City’s threat on the counter was ever-present and Agüero’s second rather deflated their challenge until the latter stages.

There is no disgrace in losing to these opponents. And if this is to be his last year in this league, performances like this from David Silva should be cherished. – Guardian