Alan Browne on target from 50 yards out in 3-0 win; Leeds go top of Championship table 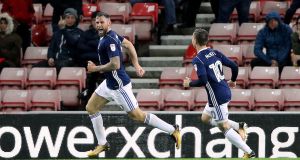 Seán Maguire nabbed his second goal in four days as Preston sent Cardiff on their way to a first defeat of the Championship season at Deepdale and opened the door for Leeds United to go top.

On 70 minutes, North End doubled their lead when Maguire squeezed the ball between goalkeeper and post. It had looked as though the summer signing from Cork City had missed his chance to shoot but he finished past Cardiff goalkeeper Neil Etheridge.

Maguire played second-fiddle on the night to another former Cork City player when Alan Browne’s scored a wonder goal on 78 minutes as the combative midfielder struck the ball sweetly from 50 yards out after Etheridge’s poor clearance.

Leeds, who had started the day in second place, leapfrogged the Bluebirds courtesy of a 2-0 win over Birmingham at Elland Road, and are now the only unbeaten club in the division.

Samuel Saiz had put them ahead after just 17 minutes, but they had to wait until stoppage time for substitute Stuart Dallas to condemn City to a fourth straight league defeat.

Promoted Sheffield United hauled themselves into third as Cameron Carter-Vickers marked his debut with the only goal at bottom-of-the-table Bolton.

They were able to do so as a result of Wolves’ 3-3 home draw with Bristol City, although it could have been worse for Nuno Espirito Santo’s men.

They led through Leo Bonatini’s first-half effort and again when Diogo Jota struck after the break, but Aden Flint’s equaliser and Famara Diedhiou’s penalty made it 2-2 and it needed a late Danny Batth goal to deny the Robins victory after Bobby Reid had put them ahead for the first time in the game.

Middlesbrough and Aston Villa played out a 0-0 draw on a night when both teams were reduced to 10 men.

The Teessiders had former Villain Adama Traore dismissed with less than four minutes on the clock for a poor challenge on Irish midfielder Conor Hourihane and after Robert Snodgrass had hit the bar, Henri Lansbury followed Traore down the tunnel for a late tackle on Marvin Johnson.

Sheffield Wednesday and Nottingham Forest both took advantage to climb above Boro with goals from Gary Hooper and Ross Wallace securing a comeback 2-1 win for the Owls over Brentford, who had led through Nico Yennaris’s ninth-minute opener.

Irish international and Sunderland old boy Daryl Murphy condemned his former employers to a fourth successive league defeat with the only goal at the Stadium of Light as Forest secured a 1-0 win.

Massimo Luongo and Matt Smith both struck inside the final 17 minutes to secure a 2-2 draw for QPR against 10-man Millwall.

Northern Ireland international defender Conor McLaughlin put the visitors ahead and despite Lee Gregory’s 41st-minute dismissal for a crude challenge on Josh Scowen, Jed Wallace doubled their lead before Rangers hit back.

There was no such drama at Carrow Road, where Norwich and Burton played out a 0-0 draw as the visitors mounted a concerted rearguard action to bounce back from their 5-0 weekend drubbing at Leeds.