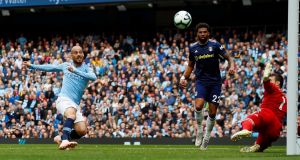 Leroy Sane marked his return to the Manchester City side with a goal as the Premier League champions eased to a 3-0 victory over Fulham.

The German struck within two minutes of his first league start of the season as the Cottagers were outgunned at the Etihad Stadium.

David Silva and Raheem Sterling were also on target as Pep Guardiola’s side maintained their unbeaten start to the season with little alarm.

City were hardly tested despite a committed effort from promoted Fulham. The hosts raced out of the blocks and were ahead within two minutes as Sane wasted no time in making a point to his critics.

The 22-year-old German had struggled for minutes in City’s first four Premier League matches and speculation all may not be right with last season’s young player of the year had been growing.

But the winger began to put all that behind him as he kick-started a strong performance by arriving in the right place to tap home from Fernandinho’s cross. With Benjamin Mendy apparently rested, Sane was City’s chief attacking threat down the left.

The opener was a poor goal from Fulham’s point of view, coming after Jean Michael Seri gave the ball away with a weak pass and Fernandinho intercepted to break clear.

City pressed for more with Sergio Aguero shooting straight at Marcus Bettinelli and the goalkeeper then did just enough to deflect a Sterling effort onto the crossbar.

Bernardo Silva orchestrated a lot of City’s good play and it was the Portuguese who set up the second, brilliantly keeping the ball in play to tee up Aguero. The Argentinian’s shot was blocked but David Silva pounced, smashing the ball in off the underside of the bar after 21 minutes. Fulham’s claims the Spaniard handled were brushed away by referee Stuart Attwell.

Fulham had some bright moments but were continually undermined by the number of times they gave away possession. Andre Schurrle did threaten from distance but City goalkeeper Ederson tipped over.

City went close to a third before the break but Bettinelli did well to deny both Sane and Sterling. Sane did flick the ball into the net following a corner but he was denied by a tight offside flag.

The hosts got number three two minutes into the second half. Aguero raced into space down the left and picked out Sterling in front of goal for a simple finish.

Fulham were fortunate to escape further damage as Bernardo Silva had a good effort deflected wide and Fernandinho narrowly missed the target with a thunderous strike.

Perhaps because the Champions League starts next week, that proved Aguero’s last significant involvement as he was replaced by Gabriel Jesus. Sterling also made way midway through the second half.

Jesus spurned a couple of opportunities but then did well to hold up play and set up Bernardo Silva, only for the midfielder to shoot well over.

Fulham almost had the final word when Aleksandar Mitrovic tested Ederson but the Brazilian denied the visitors an injury-time consolation.