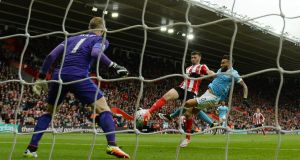 Not the best preparation for Real Madrid, nor the best message to Manchester United. This was as comfortable an afternoon for Southampton as it was a wretched one for Manchester City, depleted and disconnected while Sadio Mané tore them to shreds.

Mané’s hat-trick capped a rampant display from Saints and, while Manuel Pellegrini can rightly argue about being hung out to dry by the Premier League schedule, this result will hardly immerse his squad in confidence before a daunting European semi-final in the Spanish capital on Wednesday.

“Are you watching Real Madrid?” chanted the City fans ironically once Mané had completed his hat-trick, with Shane Long having given Southampton the lead and Dusan Tadic orchestrating things beautifully in midfield. Kelechi Iheanacho was the only City player to emerge from this game with any pride, scoring one goal before half-time and a stunning late consolation.

It means City finish the day four points above Manchester United in the league table, having played a game more, and with their rivals having three matches left to play this season after their earlier draw against Leicester.

For City, only three players who started here also did in the midweek first leg against Real Madrid, which ended goalless. Joe Hart, Nicolás Otamendi and Fernandinho all remained, and this unrecognisable side were sliced through with relative ease. There were too often gaping spaces for Saints to exploit in wide areas, with Pablo Zabaleta and, in particular, Aleksandar Kolarov, regularly abandoning their defensive duties. Tadic was causing major problems early on and all Southampton threats came from the flanks.

Fraser Forster had palmed away a Raheem Sterling shot after Iheanacho had outmanoeuvred Virgil van Dijk on the touchline, but Southampton were suddenly into their stride. Within eight minutes of that chance for Sterling, City were two down and blue shirts in defence were staring blankly at each other.

Tadic was in the thick of it for both goals. The Saints right back, Cuco Martina, lofted a ball through for Tadic in the 25th minute and, with the Serb flying at pace, he deftly lifted it across goal with a single touch of the left foot and Long prodded past Hart.

Seconds later, City were cut apart again. Once more the opportunity arose from a lack of cohesion down City’s left, Victor Wanyama breaking up play in midfield and feeding Tadic, who advanced forward and slipped a precise ball between Kolarov and Mangala to Mané, who emphatically finished past Hart.

Iheanacho clawed City back into the match before half-time. The 19-year-old was the only City player injecting a sense of urgency into their play and, in the 44th minute, fed Samir Nasri out wide right and headed the resulting ball past Forster following a ricochet off Martina at the far post.

In the 57th minute Southampton had a third. Davis whipped in a corner and, although Van Dijk’s header was tipped excellently onto the bar by Hart, the rebound hit the turf and fell to Mané at the far post who swept home.

The Senegalese attacker completed his second Premier League hat-trick – his first being the quickest in history, last season – in the 68th minute. Van Dijk outmuscled Iheanacho in midfield and Tadic fed through Mané on the counterattack, with the finish once again assured.

There was still time for a pearler from Iheanacho on the edge of the Southampton penalty area, as the home fans sang: “Gareth Bale, he’s coming for you,” to end a compelling game.