Séamus Coleman returns to action after 10 months out 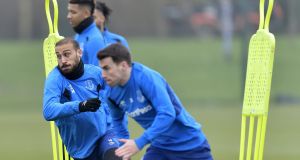 Séamus Coleman played 58 minutes for the Everton under-23 side at Goodison Park on Tuesday night. Photo: Getty Images

Séamus Coleman played just under an hour for Everton under-23s on Tuesday night in his first game back after 10 months out with a broken leg.

The Republic of Ireland captain lined out at his customary right-back slot against Portsmouth’s under-23 side in a Premier League Cup game at a cold and windy Goodison Park.

Most of the play was down Coleman’s side of the pitch in a first half where Everton eventually gained dominance before opening the scoring through Nathan Broadhead.

⚽️ | 58 minutes of action for Seamus Coleman in his return to action for Everton Under-23s.

Great to see you back, Seamus.

Bassala Sambou put Everton 2-0 up after 48 minutes and Coleman’s night ended after 58 minutes when he was substituted, receiving a warm reception from the few Toffees supporters that braved the cold.

The 29-year-old from Donegal has had a long road to recovery since his horror injury suffered as a result of Neil Taylor’s tackle in Ireland’s 0-0 draw with Wales on March 24th last.

Earlier this month, Sam Allardyce confirmed that Coleman had returned to first-team training after that double leg break and the Ireland captain was at Goodison Park on Saturday where he was seen making his way to the dressing room to speak to James McCarthy after the midfielder suffered a similar injury.

With a return to competitive first-team action now on the cards, Coleman could be part of the Ireland squad that travels to Turkey for a friendly on March 22nd.