Séamus Coleman: How other players fared after similar injuries 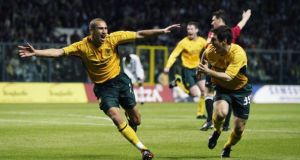 Republic of Ireland captain Seamus Coleman is facing a lengthy spell of rehabilitation after suffering a double leg fracture against Wales.

The Everton defender had an operation to pin the tibia and fibula in his right leg, with surgeons confident the 28-year-old will eventually make a full recovery.

Here is a look at some other players who have suffered similar severe injuries.

David Busst: Coventry defender Busst suffered a double compound fracture after colliding with Manchester United’s Denis Irwin during a match at Old Trafford in April 1996, which left part of his fibula bone sticking out. The extent of the injury left Busst with the possibility of amputation, facing some 20 operations and a number of infections, which eventually forced his retirement without ever playing professional football again.

Luke Shaw: United full-back Shaw, signed from Southampton for £27million in the summer of 2014, was left with a broken leg in two places following a sliding challenge by Hector Moreno during a Champions League match at PSV Eindhoven. The England international did not return to action until the start of the 2016-17 campaign when he played in the Community Shield against Leicester at Wembley.

Henrik Larsson: Celtic forward Larsson was left with a double leg fracture when making a tackle against Lyon in a UEFA Cup match during October 1999. It was seven months before the Swede was able to return to play, and he went on to become Celtic’s record goalscorer.

Aaron Ramsey: Arsenal midfielder Ramsey had his right leg broken in two places following a tackle by Stoke defender Ryan Shawcross in a Premier League match in February 2010. The Welshman would spend some nine months in rehabilitation before making his comeback during a loan spell at Nottingham Forest. Ramsey, though, went on to put his injury problems behind him, with his goal winning the 2014 FA Cup final in extra-time against Hull and he also helped take Wales to reach the semi-finals of last summer’s European Championship in France.

Roberto Di Matteo: Italian midfielder Di Mattteo saw his playing career brought to an early end following what transpired to be a triple leg fracture and a sliced nerve after St Gallen’s Daniel Imhof slipped on the wet pitch in Zurich during a Uefa Cup tie in September 2000. Di Mattteo eventually decided to retire at the age of 31, and was asked to lead the Chelsea team out at the 2002 FA Cup final against Arsenal. The Italian came back to Stamford Bridge to join the coaching staff, where he succeeded Andre Villas-Boas and then guided the team to both FA Cup and Champions League success, but was later sacked in November 2012 following a poor run of form.

Eduardo: Arsenal forward Eduardo suffered a broken left fibula and dislocated ankle following an over-the-top tackle from Birmingham defender Martin Taylor in a Premier League match at St Andrew’s in February 2008. In the immediate aftermath, Gunners boss Arsene Wenger said Taylor “should never play again”, before later retracting his comments. The Brazil-born Croatian forward did recover to play again, scoring on his return in an FA Cup tie against Cardiff almost a year later. Eduardo left Arsenal for Shakhtar Donetsk in the summer of 2010 and now plays for Atletico Paranaense in Brazil.

Alan Smith: Manchester United forward Smith broke his left leg and suffered a dislocated ankle when he landed awkwardly in a match at Liverpool in February 2006. Smith was able to make a full recovery, as he played again within seven months. The England forward went on to have spells with Newcastle, MK Dons and Notts County, where he is also now part of the coaching set-up under Kevin Nolan.

Marcin Wasilewski: Poland defender Wasilewski was part of Leicester’s Premier League title-winning squad last season, but spent nine months in rehabilitation when at Anderlecht after a rash tackle from Standard Liege’s Axel Witsel in August 2009 left him with open fractures on both the tibia and fibula. Witsel was subsequently banned for eight matches by the Belgian federation.