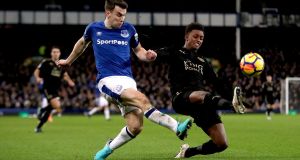 Séamus Coleman has described his return to competitive action with Everton on Wednesday as a “special night,” but acknowledges that, despite playing 90 minutes and producing a strong performance in the win over Leicester City, his return to full fitness may take a little more time to complete.

“It felt brilliant to be out there,” the Irishman said in an interview with the club’s website after the game. “I’m delighted to be back and to put the jersey on again. I’m so grateful for the reception that I got but I had a job to do and I wanted to make sure I played well.”

He had, he suggested, had to put the significance of the occasion out of his head in order to focus but, he said, it had been a “special night,” one that he says he “will always remember”.

“I found out a couple of days ago from the manager (that I was starting),” he continued. “I had been preparing for that moment for the last 10 months. The manager said at half-time to give them a nod when I started to fatigue, but I just told him there was no way I was going to get tired. He told me to use my head and be sensible but I’d been waiting 10 months so there was no chance I was going to tire - although I did blow up a little bit at the end!”

Allardyce meanwhile was delighted with the defender’s return but suggested that he might be rested at the weekend when Everton are due to head to Arsenal, a prospect that Coleman says he accepts, however reluctantly.

“I want to play against Arsenal, of course, but nowadays with sport science and things like that it’s a lot more analytical. Back in the day, you would be thrown back in and left to keep going. But we have a good team here behind the scenes who know what they are doing. I am just happy to be back out there. When the manager needs me, I’ll be ready.”

His manager described his performance, and especially the way he was still running hard as the game moved into added time as “an example to every player at this football club,” and Allardyce suggested that there had been early evidence that Coleman’s new partnership down the right flank with Theo Walcott, who scored both of the game’s goals, was “flourishing” with the Everton boss hailing the “quality and understanding” on display in the game. The former Arsenal player seemed happy too.

“Having him around is obviously fantastic,” said Walcott.

“You can just see his work-rate up and down that right-hand side. He just shows he is at a completely different level when he comes back like that. He was up and down that wing, helping me out, talking and that is what it is all about.

“Seamus is a completely new animal and I really don’t know how he gets that energy. I’m a so-called old-school winger, up and down and working hard for the team but that link-up play with Seamus was fantastic to see.”

Elsewhere Cyrus Christie, who has been standing in for Coleman at international level, says he is delighted with his move to Fulham which was completed late on Wednesday evening. The 25 year-old had only joined Middlesbrough from Derby last summer and started well at his new club but then fell out of favour in recent weeks following the appointment of Tony Pulis whose more defensive approach had resulted in the Christie being displaced by Ryan Shotton.

“It’s definitely a club that suits me, the way they play, I think, is going to going suit my style,” said the right back for whom getting forward is a key part of the game.

There had been speculation before the move that Fulham saw Christie as a replacement for Ryan Fredericks who was himself being linked with a transfer to West Ham but the former Tottenham trainee didn’t move in the end and Christie says that he is happy that the pair can fit into the side together. “I’m equally comfortable on the right, and I’d imagine he is too because he is a fantastic player so I think the two of us being here can push us both on to the next level,” the Republic of Ireland international told the club’s website before meeting the rest of the squad.

“Everybody wants to play in the Premier League, that’s the dream and there’s a couple of months left in the season now so it’s up to everyone to put their all in and make it happen but you look at where they are in the table (sixth) and their recent form (16 points from six league games and 20 goals scored)."

Former Ireland under-21 international goalkeeper Stephen Henderson, meanwhile, is back at Portsmouth after having moved on loan from Nottingham Forest. “I got a call in the morning and was on the motorway down to Portsmouth as soon as I got the green light,” said the 29 year-old Dubliner who had the best part of a season at Fratton Park in 2011/12 before being allowed to leave for West Ham on an emergency loan.

“My time here before was very short - that was out of my hands as everybody knows. I never really got settled after that. The club needed money back then and told me I was sold (to West Ham), but I’m back now, so it’s happy days.”