Séamus Coleman goal lights the spark as Everton fight back 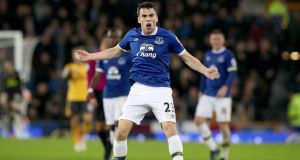 Arsène Wenger may have detected an inner-resolve from Arsenal this season, a sign that the flaw behind persistent Premier League title failures has finally been resolved, but it was conspicuously absent as their 14-game unbeaten run halted at an impassioned Goodison Park. Ashley Williams’s late header shattered any prospect of a place at the league summit as Everton conjured an unexpected triumph.

The Wales captain sent a textbook header into Petr Cech’s top corner with four minutes remaining to complete a spirited fightback by Ronald Koeman’s team. It was they who showed fight and aggression, twice hacking clear off their own goal-line in a remarkable finale, and Arsenal were found wanting in the face of it. The only blot on Koeman’s night was a second yellow card for Phil Jagielka that rules the captain out of Monday’s Merseyside derby.

Ross Barkley returned to the starting line up for the first time in three games as Koeman shuffled the supporting cast behind Romelu Lukaku yet again. There was also a recall for Aaron Lennon, a first league start for Enner Valencia and a change of formation as Koeman opted for a five-man midfield, with Gareth Barry rested.

The Everton manager’s frustrations with a dismal run had finally surfaced on the eve of Arsenal’s visit when he claimed the squad is unbalanced, not aggressive enough, lack physicality and are also suspect mentally given how often they have been reactive rather than proactive this season. But apart from that …

Koeman’s concerns were borne out in the half hour before Barkley and James McCarthy invigorated their team and the crowd with two thunderous challenges in quick succession. Everton were initially compact and organised but Arsenal’s pace and movement in the attacking areas, exemplified by Alexis Sánchez, exposed the home side’s lack of confidence against a ball-playing team.

The visitors could have been ahead from their first attack, when Alex Oxlade-Chamberlain released Nacho Monreal down the left and he pulled the ball back invitingly for Mesut Özil. The Germany international, unmarked inside the penalty area, swept a first-time shot high over the bar.

The contrast between the teams’ attacking styles was growing increasingly apparent before the visitors took a 20th-minute lead. Arsenal played with the understanding, composure and imagination of a settled side seeking to dislodge Chelsea at the Premier League summit. Everton, as has been the case throughout their recent toils, resorted to hit-and-hope long balls to an isolated Lukaku. They appeared bereft of any other ploy but needed to find one after falling behind in slapstick fashion.

Özil opened the Everton defence with an exquisite ball down the left and that was the only touch of quality required before the ball nestled in the back of the Gwladys Street net two minutes later. Having dealt with the danger, Valencia overran the ball on the edge of his area. It fell to Barkley, who was sluggish and dispossessed by Francis Coquelin. It fell to Williams, who made a reckless attempt to win the ball and missed completely, leaving Jagielka to continue the mayhem by fouling the Arsenal midfielder on the edge of the box.

Sánchez applied the coup de mess. His low free-kick deflected off Williams’ calf to leave Maarten Stekelenburg floundering as the Everton goalkeeper got a hand to the ball but could not prevent it sailing in.

Arsenal were comfortable, Everton lacking even the basics but with Koeman despairing at Stekelenburg’s long clearances and the crowd restless, the contest was transformed by nothing more than a show of aggression and commitment from the home side. After Barkley, McCarthy and Aaron Lennon had snapped into challenges, Everton suddenly had the crowd on their side and energy in their ranks.

Lukaku drove over, Lennon sliced a decent chance wide after Monreal failed to deal with a Barkley free-kick and with Everton on top, Coleman equalised moments before the interval. The goal will have realised Arsenal’s worries about losing Shkodran Mustafi from the heart of their defence through injury. Leighton Baines was given time by Héctor Bellerín to cut back on to his right foot and sweep a dangerous cross into the area where his fellow full-back appeared unmarked between Laurent Koscielny and Gabriel to beat Cech with a glancing header.

Coleman’s celebration, cupping his ears to the crowd, perhaps revealed his annoyance with recent criticism and there was a minor melee on half-time involving McCarthy, Özil, Williams and Granit Xhaka.

Koeman could not complain. Anger suited Everton and Arsenal, after those early flashes, were relatively subdued in reply. Theo Walcott and Oxlade-Chamberlain were anonymous and it was no surprise when Wenger withdrew both.

As in the first, Özil sent Arsenal’s first opportunity after the restart over Stekelenburg’s goal when he should have found the target from Sánchez’s cut-back. The Everton keeper was injured in a collision with Baines when saving at the feet of Özil and, thanks in part to his team’s careless distribution, he remained under pressure as the visitors pressed for victory. They remained susceptible to Lukaku’s strength on the counter attack and the awareness of Barkley, responding to a deeper midfield role with a fine display.

Koeman introduced Dominic Calvert-Lewin, the 19-year-old signed from Sheffield United in the summer, and the young striker was involved in the winner, his header from Baines’ free-kick deflecting out for a corner. Arsenal were static when Barkley’s delivery arrived on the penalty spot and Williams steered his header beyond the reach of Cech.