Séamus Coleman: Everton should be pushing for top four under Ancelotti 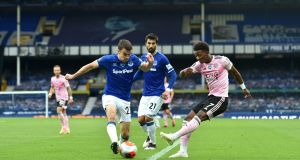 Between spending far more time than he is used to with his two young children, and acting as an intermediary between the Everton hierarchy and his teammates in negotiations that led to substantial wage deferrals, Everton’s captain, Séamus Coleman, is glad to be finally back playing football, if only for a modicum of respite after the game’s enforced break.

“It was definitely a busier time than I would have expected and being a captain of a football club, it’s not something that you would have ever expected to have been getting involved in,” he says of his role as Goodison Park shop steward. “I need to look after my players and there was no issue with the club at all. They were fantastic, so having to do it with Everton was probably an easier job than at other clubs, but it was definitely a busy time.”

Now back doing a job with which he is more accustomed, Coleman concedes that playing behind closed doors has taken some getting used to. “It’s been strange,” he says. “The first game back was on a Sunday and we played on the Wednesday, and I think just having time to look at the games and just realise that’s what it’s going to be like was probably good for us.

“You just have to try to be as professional as you can once you get your kit on and you see the other team. But look, we want fans back in the stadium as quickly as possible because it’s not the same. It’s not the same buzz when lads score a goal; you want to be able to celebrate amongst your fans.”

Unbeaten since the season emerged from hiatus and hoping to win a third consecutive game for the first time in more than a year, Everton travel to White Hart Lane full of confidence that is unlikely to be shared by a home side bruised from being rolled over by both Sheffield United and the bus under which their manager, José Mourinho, threw them following a limp surrender at Bramall Lane.

“I want the club to be back challenging for Champions League places and what-not,” Coleman says. “Carlo Ancelotti has not put pen to paper on a contract at this club to be with a mid-table team. He wants to be successful. It’s up to the players to keep driving it on. I said a couple of weeks ago, if we are not good enough, then I’m sure this manager will see it and bring his own players in. It’s up to us to give it our all to make sure we are part of the future.”

The bit firmly between his teeth, Coleman expounds on the infuriating lack of consistency for which the name Everton has long been a byword. “We need to build that mindset to expect to win games,” he says. “I think Monday will tell a lot about that. Tottenham are off the back of a difficult result but they’re a really good team with good players and a good manager. It’s up to us now to go away to one of those teams and come back with three points, to show the mindset has changed and that we are really pushing in the right direction.”

On a more personal level, during a season punctuated by injury and suspension, Coleman’s place as an Everton first-team staple came under threat from Djibril Sidibe, on loan from Monaco and linked over the weekend with a move to Paris Saint-Germain. The Irishman welcomes the competition, up to a point.

“Listen, you want to play every game, but your football career is a journey of ups and downs,” he says. “When I go to bed at night, or finish training, and I look in the mirror regardless of how I played, it is about two things: am I a good teammate and have I given 100 per cent in training? And the answer is always yes. Do I give the ball away? Do I make mistakes? Everyone does, but as long as I can look in the mirror and know that I am giving my all, then when Sidibe is in the team I am supporting him 100 per cent because I want the best for the club. I want to play but I also want my team to do well. I will always support whoever plays.” - Guardian