Sánchez a source of tension in divided Arsenal dressingroom 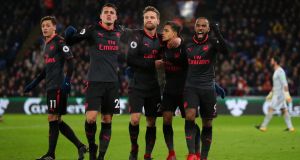 Alexis Sánchez was at the heart of a dressingroom bust-up after Arsenal’s away win over Burnley last month and the tensions between the Chile striker and some of his team-mates – which have simmered for some time – were laid bare during the club’s victory at Crystal Palace on Thursday night.

Sánchez was involved in a well-documented confrontation with Laurent Koscielny at Arsenal’s training ground last March, on the eve of the visit to Liverpool – a game for which Sánchez would be dropped – and the divisions in the team were there for all to see in the 3-2 win over Palace.

Sánchez scored twice but five of his out-field team-mates did not celebrate his first goal with him. The refuseniks were Koscielny, Héctor Bellerín, Sead Kolasinac, Calum Chambers and Jack Wilshere. Sánchez appeared to gesture in surprise at the lack of celebrations around him. When Sánchez scored his second, Koscielny did not move from his spot inside his own half. The rest of the team did follow Wilshere – who had made the goal – over to the away enclosure where Sánchez was celebrating.

The Burnley flare-up on November 26th was not physical but it involved Arsenal players calling out Sánchez over what they have come to consider as his bad attitude. He was told in no uncertain terms that the team were tired of his on-field histrionics; the way he sometimes whirls his arms in frustration when things go wrong.

Sánchez, who had scored the only goal of the game at Turf Moor from the penalty spot, argued he was merely trying to help his team-mates but it was put to him that the best way to do so was through encouragement. It is fair to say Sánchez took issue over that.

The 29-year-old, whose contract expires in June 2018, was desperate to leave the club last summer and he was on the brink of a £60m move to Manchester City on transfer deadline day. But Arsenal failed to close a deal for Monaco’s Thomas Lemar and they pulled the plug on Sánchez’s switch because they would not sell him without having a player to replace him in the line-up.

Arsène Wenger believed Sánchez would re-focus for the final year of his contract; that his ferocious will to win would overtake his other concerns when he stepped onto the field. The manager also hoped that the prospect of a World Cup with Chile at the end of the season would serve as additional motivation. Sánchez would be left heartbroken in October when his country failed to qualify.

Sánchez has scored eight times for Arsenal this season and he was excellent at Palace in a game that his team had to win. But his form has been up-and-down and it has been a constant topic of discussion at Wenger press conferences.

Some of his team-mates have grown weary of him and, as it has become obvious to them that he will not re-sign at Arsenal, they feel it would be better for all parties if he was sold. City still want him and the question is whether they will move in January or wait until the summer, when he will be available for nothing. Paris St-Germain have also been credited with an interest in him. Wenger’s position is he expects Sánchez to honour the remainder of his contract, although that could change if City, PSG or anybody else made an offer for him in January.

Thierry Henry, the former Arsenal striker, said on Sky Sports after the Palace game that it was clear to him there was a rift among the players. “There is a division in the team,” Henry said. “He [SÁNCHEZ]is asking them to come and celebrate. ‘Why are they not coming? Don’t you want to celebrate?’

“I don’t know what the situation is there but usually when your team scores, you don’t look at who scores. If you start to think: ‘Shall I go, shall I not go?’ – there’s something we don’t know exactly what’s happening. What I’m trying to say is you’re not here for Alexis Sánchez, you’re here for Arsenal. Arsenal scored, go and celebrate. I noticed it [Sánchez’s gesture]. Sanchez made me notice it. It was like he thought he was alone.”

Henry’s fellow Sky Sports pundit, Graeme Souness, added: “It’s a divided dressingroom. Some of them are not having Sánchez and his situation. I think it’s clear. I think it tells you there’s a dynamic going on in that dressingroom that would suggest it’s not well.”