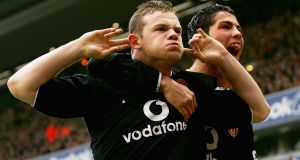 That was then: Wayne Rooney and team mate Cristiano Ronaldo of Manchester United celebrate Rooney’s goal during the Barclays Premiership match between Liverpool and Manchester United at Anfield on January 15th, 2005. Photograph: Bryn Lennon/Getty Images

It is a pity in some ways that fifth-round replays have been abolished in the FA Cup. Wayne Rooney turns 35 this year, and with Derby County in the bottom half of the Championship the chances seem slim of a return to Old Trafford to allow the Manchester United faithful one last chance to show their appreciation.

Doubtless Rooney will be warmly received by the travelling United support at Pride Park for Thursday’s Cup tie, though one imagines the Manchester reaction to a fleeting visit by a card-carrying club legend would be something to behold. Perhaps the former England striker is not quite as revered as, say, Eric Cantona, because he joined a winning side rather than completing an emerging one; stayed longer, possibly a season or two too long; confounded a few managers; held a gun to the club’s head on a couple of occasions and failed to amuse the world with gnomic utterances about seagulls following trawlers, but if the Frenchman was half-footballer, half-folk myth Rooney has the numbers to prove he is the complete United hero.

Among former players, Bobby Charlton is still the ultimate Manchester United icon, a survivor of Munich and winner of the World Cup, though Rooney eclipsed his goalscoring records for club and country before moving on from Old Trafford. That sort of productivity brooks no argument, particularly as Rooney scored his 253 goals in about 200 fewer appearances than Charlton made to post the previous record of 249.

The comparison is not quite exact or fair, Charlton played more as a midfielder than out-and-out striker, though he did stay at United for practically the whole of his playing career. Rooney ended up in midfield, not always convincingly, but played more than 100 games for Everton either side of his United career, and has just come back from a couple of seasons in America with DC United. While in the States, Rooney not only contributed some spectacular goals and assists, he kept up his overall scoring standard by averaging roughly a goal every other game. He scored 25 times in 52 appearances for DC United, his 253 goals for Manchester United came in 559 appearances, and his England record of 53 goals came from 119 call-ups.

That makes him the most-capped England outfield player, second only to Peter Shilton in the appearance list and, with 208 goals, Rooney is also the second most prolific scorer of the Premier League era behind Alan Shearer. While all that adds up to a consistently impressive output that few are going to match, it is the special moments in a United shirt that the present generation of Old Trafford supporters hold most dear.

The hat-trick on debut against Fenerbahce when debate was still raging about the wisdom of United spending £25 million on a teenager. The sum seems trifling now, but Alex Ferguson later confirmed that “plenty of eyebrows were raised” in 2004 when he recommended the signing to the board. Kissing the United badge on his shirt after scoring a goal against Everton. Scoring twice and having a hand in the other three as United came back from a two-goal deficit to win at Tottenham in 2009. The overhead bicycle kick against Manchester City in 2011 that brought just one of Rooney’s goal-of-the-season awards and was described by Ferguson as a personal favourite.

There were many other milestones in a 13-year United career, and plenty of colour and controversy too. On and off the field, even as he approached Charlton’s scoring records, Rooney never quite cut the blameless figure of his gentlemanly predecessor, though in terms of cautions and red cards the tolerances for what is permissible have changed massively in the past couple of decades, along with the pace of the game and the demands from managers for forwards to become much more involved in winning the ball back.

The FA Cup has changed a lot too, and not necessarily for the better. If it seems ridiculous that United and Derby will know their quarter-final opponent before they kick off, it is no more ridiculous than abandoning the principle of replays halfway through a knockout competition or staggering the fifth round across four weekday nights for maximum television exposure. This venerable old institution, with its semi-finals at Wembley and final kicking off at 5.50pm, looks like something designed by a committee, trying to satisfy everybody and ending up pleasing no one.

Yet Rooney coming up against his old club is a plot twist anyone can savour. It will be 18 years in October since the Goodison goal against Arsenal that announced the 16-year-old Rooney’s arrival on the major stage and, despite all the gloomy prognoses of burnout based on too much football at too young an age, his career is still going strong. Not quite as strong as before, granted. But, taken in its entirety, stronger than most.

Bernard Le Roux cleared to face Ireland on Saturday after disciplinary hearing 15:55
Johnny Sexton: ‘We just know we have to be a lot better in all areas on Saturday’ 15:43
Harrington keen on breaking her Breeders’ Cup duck at Keeneland 15:16
Neil Lennon brands criticism of Shane Duffy’s Celtic performances ‘hysterical’ 14:58
19 Premier League clubs sign up for new FA diversity code 13:52