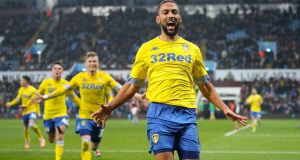 Kemar Roofe snatched victory in stoppage-time to send Leeds United top of the Championship table at Christmas and complete an extraordinary comeback after Aston Villa squandered a two-goal lead at Villa Park.

Just as it looked as though Villa would play the unwelcome role of the Grinch, a superb second-half riposte by Leeds earned Marcelo Bielsa’s side a sixth straight win after victory in an exhilarating encounter.

Tammy Abraham and Conor Hourihane saw Villa race into the lead inside 16 minutes, but the substitute Jack Clarke powered home before goals by Pontus Jansson, and then Roofe – with 90 seconds to play – sealed a memorable win.

The turnaround was sufficient for Leeds to dethrone Norwich City off the summit of the Championship and the omens are very much in their favour too given that, since the turn of the millennium, the league leaders at the halfway stage of the season have gone on to clinch promotion on 15 occasions.

This was a topsy-turvy game, played at a frenetic pace from the moment John McGinn charged into a Leeds blockade from kick-off. Even before Abraham swept his 13th goal of the season into the roof of the net after a teasing ball by Hourihane caused havoc, Leeds – who welcomed their captain Luke Ayling back – had another defensive headache to cope with. Scottish defender Barry Douglas withdrew from the warm-up ill late on, forcing Bielsa into a reshuffle, with the 18-year-old Leif Davis in for his debut.

Leeds’ preparations were hampered before arriving in Birmingham too, with striker Patrick Bamford withdrawn from training on Saturday, a week after making his own comeback from injury. Leeds had an opportunity to immediately restore parity but Jack Harrison, the Manchester City loanee, failed to scramble home Roofe’s cross.

Instead Villa assumed control, when Republic if Ireland midfielder Hourihane arrowed a sweet strike into the corner of Bailey Peacock-Farrell’s goal after good work by Jonathan Kodjia, who jinked inside after Harrison cheaply squandered possession. Bielsa was baffled, leaping off his bucket on the touchline and, just as he did against Bolton last weekend, the Leeds coach summoned the lively Clarke, another teenager from the academy.

Villa showed glimpses of magic, with Yannick Bolasie’s nutmeg on Ayling earning the seal of approval from a gushing Holte End but 11 minutes into the second half, Clarke made the desired impact. When he drove into the opposition box at speed, the teenager had Ahmed Elmohamady, the Villa defender, backpedalling and Clarke sashayed into the area before finding the far corner of Ørjan Nyland’s goal. It had been coming, with Leeds unlucky not to pull a goal back before interval, with Villa forced to repel swells of heavy Leeds pressure.

That goal gave Leeds a new lease of life and a newfound belief and, when Pablo Hernández whipped in an inviting corner, Jansson rose highest, above James Chester and Alan Hutton, to nod in a leveller on the hour mark.

Suddenly, Villa were winded and Leeds in the ascendency, with Nyland tipping over a devious effort by Mateusz Klich before referee Andrew Madley waved away appeals for a penalty when Glenn Whelan appeared to handle Roofe’s effort at the back post. An enthralling game, in front of a sellout crowd, drew to typically frantic finish, with Roofe ultimately having the final say. – Guardian