Richard Dunne: It’s a long road, but Séamus Coleman will be back 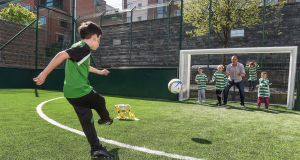 Seven-year-old Rhys Creane from Sheriff FC takes a penalty against Aviva’s FAI Junior Cup Ambassador, Richard Dunne, and some of the kids from the club during a visit to Sheriff Street in Dublin. Photo: Matt Browne/Sportsfile

Richard Dunne is no stranger to long-term injuries. The former Ireland defender was hit with groin and hip setbacks at Aston Villa – ultimately ending his spell there – before suffering a cruciate ligament injury while at QPR.

A prime candidate, then, to discuss exactly what Seámus Coleman is going through in his recovery from a broken leg and the challenges the defender will face when he returns to action.

The Killybegs fullback signed a new five-year contract at Everton on Friday in what was a huge show of faith from the Merseyside club.

While Dunne – speaking at Sherriff Youth Club as part of Aviva’s Junior Cup final community day – thinks his former Ireland teammate’s career will get back on track, he also knows that it won’t be all plain-sailing.

“You just get fed up, really. Since sort of seven or eight years old, you’ve always been involved in team sports, and doing team activities and all that stuff and having comfort in groups. So to just go in every day and be in with the physio; there is no kicking of the ball, there is no enjoyment, it’s all the dirty side of it.

“All the gym work, the running, everything, it’s very difficult. As much as you think: ‘I’ll do this step and it’s onto the next step’, every step is six weeks and it feels like six months the whole time. It drags on the whole time. It’s disheartening.”

The blue club in Liverpool are renowned for looking after their players – something Dunne, as a former trainee at Goodison Park, knows very well. It’s gestures like Koeman’s visit to Donegal that will be stand to Coleman and help to keep him in the fold, something Dunne struggled with.

“I don’t think I went to one match when I was injured because missing training was bad enough but having to go and watch matches was too difficult,” he says.

“I’m sure Seamus might be different, he might want to be involved in the games. It is hard and you do feel it’s never going to end, you have to be positive I think. I was injured, he knows he’s got a place a the club and he’s got that security. I think the fact that they’ve shown so much support in him, that will be huge benefit mentally for him.

“If you get injured, you tend to stick him in the physio room and move on and replace him, it just shows how much he’s worth to them. And as a club how family orientated they are, I think that’s what they like to call thsmelves the people’s club over there.”

While many a player has returned from long-term injury and never quite been the same, Dunne reckons Coleman won’t be affected by the scars – both mentally and physically.

“When he’s back, it will probably take a big tackle where he gets up and walks away from it and thinks ‘All right, that’s grand.’

Richard Dunne holds the record for the most own goals in Premier League history – something that, he says, would have made him “the ideal candidate” to be approached by anyone looking to fix a match.

With match-fixing on the news agenda due to the current FAI investigation into Athlone Town, Dunne says he never came across it personally but he does know a fellow player who was offered £20,000 to do something along the lines of deliberately taking a card.

Dunne said: “I find it hard to believe that it goes on. You think some other sports are a little bit dodgy and all that stuff but football, it’s impossible, when you do read stories and hear about it, it’s very…it’s disappointing really. You feel like it’s incorruptible and it’s the game that everybody loves but for some people, certain people around the world, it’s a way of making money. It’s a way of cheating people.”

Dunne also expressed sympathy for the 18-month ban imposed on former teammate Joey Barton, pointing out the “double standards” of the FA and Premier League teams when it comes to sponsorship deals with betting companies.

“You look through Joey's bets and they're pretty harmless. They're not for massive amounts of money. Like he says they are not match-fixing or anything like that, they are purely for his own entertainment and that's why it's disappointing that his ban has been so strict on him,” he said.