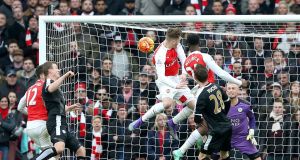 Arsenal’s Danny Welbeck scores his side’s second goal of the game as they beat Leicester in the Premier League. Photo: Adam Davey/PA

Arsène Wenger praised his players’ “mental desire” after Arsenal closed the gap in the Premier League title race with a dramatic 2-1 victory over the leaders, Leicester City, yesterday.

A keenly fought and, at times, controversial contest appeared to be heading for a draw until the fifth minute of second-half injury time when Danny Welbeck, on as substitute and playing in Arsenal’s first team for the first time in 10 months after knee surgery, glanced Mesut Özil’s free-kick past Kasper Schmeichel to spark bedlam among the home supporters.

Arsenal remain behind Leicester but have cut their lead to two points.

“This was as well a mental test for us, because to find yourself down 1-0 at half-time to a team who defends so well, you need to keep going,” said Wenger. “We came back with relentless energy and took the risks to win it. We knew a draw was not good enough. . .”

Paying tribute to Arsenal’s match-winner, Wenger said: “Danny Welbeck is a great player and everybody is happy for him because he has been out for 10 months – that is an eternity for a player. He worked extremely hard. That is why he is fit.”

Ranieri, however, praised the “outstanding performance” by his team, who took the lead through Jamie Vardy’s penalty at the end of the first half which he won in contested circumstances.

The striker, who now has 19 league goals this season, was undoubtedly on the receiving end of a clumsy tackle from Nacho Monreal, but it left the home spectators raging at the referee. Wenger claimed the penalty was “not obvious at all”.

Leicester were typically resolute, no one more so than Schmeichel and the excellent N’Golo Kanté, and despite coming under an expected onslaught from the hosts in the closing stages after being reduced to 10 men.

Their resilience appeared to have earned a draw which, following wins against Liverpool and Manchester City, would have strengthened the belief they can go on and win a first top-flight title.

“Our fans are proud of us because we are doing something special and I want our players to continue in this way, to fight,” said Ranieri.

Spurs benefited from a dubious penalty decision as they won 2-1 at the Etihad Stadium in a highly-charged contest.

Harry Kane opened the scoring from spot after Raheem Sterling was harshly adjudged to have handled the ball as he turned his back to block a cross from Danny Rose. City recovered after conceding the penalty to level through substitute Kelechi Iheanacho but Spurs snatched victory with an 83rd-minute winner from Christian Eriksen.