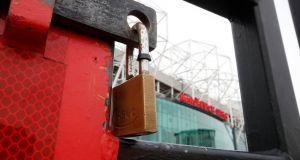 No football has been played at Old Trafford since Manchester United’s derby win on March 8th. Photograph: Martin Rickett/PA

Premier League footballers are likely to accept wage deferrals as clubs look to ward off financial problems caused by the coronavirus pandemic.

With all football in England suspended until April 30th at the earliest Premier League clubs are worried about their income drying up and are set to hold talks on Friday with the Professional Footballers’ Association about pay. The issue will then be discussed when the 20 top-flight clubs hold their next video conference on April 3rd and while there is an acceptance that players will balk at taking permanent wage cuts, it is expected that they will agree to have their pay deferred.

Clubs are expected to adopt the measures as a collective instead of taking unilateral action. There is a desire to make major savings while games are suspended, with one source saying that clubs are concerned about running into cashflow problems. Clubs are missing out on gate receipts and other match revenue and they also expect to make significantly less money if games resume behind closed doors.

An executive at one club has told the Guardian that laying off people in non-playing departments would barely scratch the surface when so much is spent on paying players. Although sources have said that some players will not be happy about not getting their full wage, it has also been pointed out that Premier League players earn enough not to encounter short-term financial difficulties. Several agents believe the move is inevitable.

Premier League owners have seen players in the Football League take cuts. Leeds United, who are top of the Championship, have announced that their players, coaching staff and senior management have volunteered to take a wage deferral to ensure non-football staff can continue to be paid. Leeds hope that the savings will also allow them to pay their casual staff and the move comes after Birmingham City asked their players to defer half of their salaries for the next four months. - Guardian