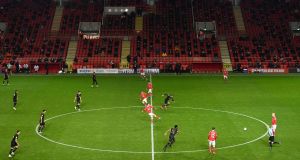 Charlton Athletic kick off as socially distanced fans look on during the League One match between against MK Dons at The Valley on Wednesday. Photo: Justin Setterfield/Getty Images

The English Football League has accepted an enhanced £250m rescue package that will see League One and League Two clubs given an immediate £30m grant to help them survive the financial impact of the Covid-19 pandemic.

The deal, which was approved at a Premier League shareholders meeting on Thursday comes after months of deadlock and government pressure on the top clubs to do their bit for the wider game, will also provide further £20m as a “monitored grant” to the bottom two divisions.

The Premier League has also agreed to provide a payment commitment of up to £15m to cover interest, arrangement fees and professional fees to allow the EFL to secure a £200m loan facility that it will then on-lend to Championship clubs interest-free.

The news was welcomed by EFL chair, Rick Parry, who said: “Our overarching aim throughout this process has been to ensure that all EFL cubs survive the financial impact of the pandemic. I am pleased that we have now reached a resolution on behalf of our clubs and as we have maintained throughout this will provide much needed support and clarity following months of uncertainty.”

Richard Masters, the chief executive of the Premier League, said the deal should ensure that no club go out of business because of the pandemic.

“The Premier League is a huge supporter of the football pyramid and is well aware of the important role clubs play in their communities,” he said. “Our commitment is that no EFL club need to go out of business due to Covid-19.

“All football clubs continue to suffer significant financial losses as a result of the pandemic, but Premier League shareholders today unanimously agreed to provide additional funding and support for EFL clubs in real financial distress.

“We are very pleased to have reached this agreement and we stand together with the EFL in our commitment to protect all clubs in these unprecedented times.”

Under the deal each club will receive a minimum payment of £375,000 in League One and £250,000 in League Two. The remaining £15m is to be distributed using a lost gate revenue share calculation, which will be approved by the EFL and Premier League.

The news was “warmly welcomed” by the culture secretary, Oliver Dowden. “I’m glad that football has come together to agree this substantial package. Fans are starting to return and we look forward to building on this as soon as it’s safe.

“With a £250m support package for men’s elite football and £300m government funding for women’s football, the National League and other major spectator sports we have fuel in the tank to get clubs and sports through this.” – Guardian