Pep Guardiola will bring flexibility to his approach at Manchester City 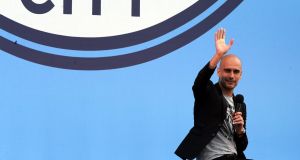 After the hoopla of Pep Guardiola’s official introduction to Manchester City, the Catalan was frank about the need to adapt if required. Guardiola is the 45-year-old coach who has accrued 22 trophies in nine stellar seasons. The man whose Lionel Messi-led Barcelona claimed two Champions League titles and reinvented the game with a brand of dizzying carousel-passing between 2008-12. Yet he is also a man who understands the need for flexibility regarding the way City may play under him.

On Sunday Guardiola appeared a touch uncomfortable at the Cityzens Weekend, in which he was hailed as a football deity as City understandably made the most of his unveiling before fans. Instantly, though, it was down to business as Guardiola spoke of how he changed tack in 2013 when arriving in the Bundesliga following a year’s sabbatical.

“I have no preconceptions at all about coming to England or the football in the Premier League. I want to learn as much as possible. I have an idea of how we will play but, when I arrived in Germany with Bayern Munich, I had some ideas of how the team would play but changed them as I went along,” he said.

“I know how hard the Premier League is and some people have said that I will find it hard to play the football I like to play in England so I said to myself ‘Why not?’ That’s why I’m here – because I want to try.

“We have to find a way to win and if we win one game, the next week we will say ‘Okay, let’s try and do the same things this week’ – and if we win again, we’ll say, ‘let’s do the things that won us those two games’ and so on.

Here Guardiola directly addresses the view that his previous success has been at major clubs in leagues where competition is either limited (La Liga’s three-horse, Atletico-Barca-Real Madrid affair) or close-to-zero, (the Bundesliga, where Bayern have been champions the last four seasons).

The difference at City is that Guardiola is not taking over a club high on the emotion of a league, domestic cup and European Cup treble as Bayern were in summer 2013. City still expect him to win, of course. But given the jumbled displays at times under Pellegrini, which derived from the Chilean’s mono-tactical approach, Guardiola starts from a lower base point.

He pointed to this when stating what his first task is. “Play good. And after try to win one game and after second one and another but the first target is team spirit and play good,” the Spaniard said.

In this context Ilkay Gundogan’s €25 million signing from Borussia Dortmund can be viewed as a statement of intent. The 25-year-old is a midfielder broadly in the mould of Xabi Alonso or Xavi: all love to control a game from a deep-ish lying berth.

Alonso was bought by Guardiola for Bayern from Real in summer 2014 for the role. Xavi was chief puppeteer for him at Barca. Given the dominance of Yaya Toure’s barnstorming style from central midfield in recent City teams, Gundogan’s arrival underlines the change of style that can be expected.

There is sure, too, to be the trademark emphasis on technically quick footballers, like Raheem Sterling, whom Guardiola contacted during Euro 2016 to assure he will be a “big part of my plans”. As a ball-playing central defender Everton’s John Stones, a proposed target, also fits this mould. And, given Sergio Aguero’s ranking as one of the world’s finest goal-scorers, expect Guardiola’s City to be more direct than either his Barca or Bayern, where he was no advocate of the traditional No 9.

Gundogan will not be available until late August at the earliest on account of a knee injury. But expect the new Guardiola City model to be on display as soon as his opening match kicks-off, a friendly at Bayern on July 20th.

Expect, too, each and every footballer Guardiola fields to become better as he seeks success. “Every manager in the world wants to improve their players,” he said. “That is why if he is able to, he improves the team. I work like all the managers in the world. I have my point of view, my way to do my job. I need time but as soon as possible we are going to try and create team spirit. That is the most important thing. After you can create tactics but we have to create something special with ourselves.”