Argentinean made comeback with cameo in win against Newcastle on Saturday 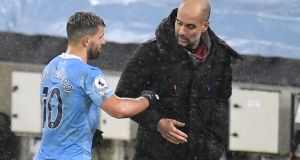 Pep Guardiola welcomed the return of a “sharp and dynamic” Sergio Agüero, with the Manchester City manager admitting his team need their record goalscorer.

The striker impressed Guardiola in a 13-minute substitute appearance in the 2-0 win against Newcastle on Saturday and is in contention to start at Everton on Monday night. Agüero’s recovery from the serious knee injury sustained last season against Burnley, hampered by further setbacks, has limited the 32-year-old to eight appearances this season but Guardiola was enthused after the cameo on Saturday.

“We discussed whether to start with Sergio [against Newcastle],” Guardiola said. “I need him. It was very good news in general that in the minutes Sergio played we saw him sharp and dynamic. This is incredible news for us. We need him, absolutely.

“But we have to be careful. We cannot do what we did in the past, when he comes back [too soon] and then gets injured. I still want to handle the minutes but I saw him well – and I love this guy.”

Ilkay Gündogan scored City’s opener and Ferran Torres added the second with Guardiola praising the latter, who operated as an auxiliary No 9 in Agüero’s absence. Gabriel Jesus had been ruled out because of a positive Covid test. “Ferran did an incredible job – it’s not a usual position for him,” the manager said. “He’s a winger so it’s not normal for him to play there.”

City’s win took them to 26 points, and though Guardiola rued several missed chances he believes the display was his side’s best of the season. “We have won games in the past but we were not playing the right tempo. Everyone has to pass the ball and know their position. When we have several players in several positions at the right moment, we make an explosion. Today was maybe one of the first days [this season] that we saw it. That is why I’m happy.

“We controlled everything. I don’t know how many millions of passes we had, and that is the way we want to play – picking the right moment to attack. We missed two goals inside the six-yard box and that happens, we have to improve this, we know it, but it’s important the way we play. It’s not passing the ball for passing the ball’s sake. It’s passing the ball with sense.

“Today we saw a lot of things we want to see. Everyone in his position doing what he has to do. With this we will win more games in the future.”