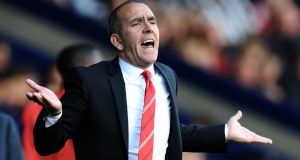 Paolo Di Canio: ’There was no training ground bust-up as some are reporting and many of the players have since sent me messages thanking me for my time as their manager and helping them improve as footballers’. Photograph: Tony Marshall/Getty Images

Paolo Di Canio has broken his silence over his sacking by Sunderland to deny reports of a training ground bust-up and insist he should have been given more time at the Stadium of Light.

Di Canio was dismissed after just 13 games in charge following the 3-0 defeat at West Brom last month, amid suggestions some of the club’s senior players had been instrumental in his removal. In a statement released today, however, the Italian described the reports as “wholly untrue” — and repeated his belief that he was capable of turning the club’s poor start to the season around.

“There was no training ground bust-up as some are reporting and many of the players have since sent me messages thanking me for my time as their manager and helping them improve as footballers,” Di Canio said. “We could see that results had not gone as well as any of us had hoped, but I felt as a team we could turn things around.

He added: “When I joined the club last season with the aim of saving them from relegation I was happy to be offered the opportunity to manage in the Premier League. I walked into a challenging situation but achieved what I was asked to do, the highlight of which was the fantastic performance and win against Newcastle, which is something I will always remember.

“When you bring in 14 new players, many from overseas and very few with Premiership experience it is going to take time for them to adapt to the English game and to gel as a team. As I have said many times, I love English football and I feel that my time at the club has been unfairly cut short as given the chance, I am certain that had I been allowed longer, I would have been able to develop the team to achieve the success Sunderland fans desire.

“I remain confident in my ability and I want to manage again in England as soon as I can. When things like this happen it is important to take something positive from it. I have learnt a lot from my brief time at Sunderland and I am sure that this will only make me a better manager in my next job. Even though my time at the club ended prematurely, I would like to thank Sunderland for giving me my first opportunity to be a Premier League manager.”