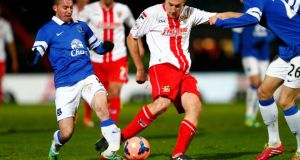 Everton’s Bryan Oviedo has his leg broken as he tackles Stevenage’s Simon Heslop during their FA Cup fourth round match at Broadhall Way on Saturday evening. Photograph: Eddie Keogh/Reuters

Stevenage 0 Everton 4: Momentum, rather than points, will be the most significant reward for the winners of tomorrow night’s Merseyside derby, according to Roberto Martinez.

“Being able to play in the manner that we can do away from home in one of the hardest grounds from our point of view would be a massive achievement,” said the Everton manager, after watching his much-altered side recover from seeing their team-mate Bryan Oviedo suffer a double fracture of his left leg early in the game to dismantle their League One opposition.

Almost as impressive in what he had to say afterwards as his team had been on a soft but not unplayable pitch, Martinez played down an injury list that is requiring him to demonstrate the depth of his squad to its fullest.

While the bloodied and momentarily dazed Liverpool central defender Martin Skrtel was stapled together and sent back out to complete the game at the Goldsands Stadium, Martinez felt able to substitute Phil Jagielka at half-time as a precaution.

Different opposition of course, and asked whether the fact Rodgers had played what amounted to a full strength lineup, with Daniel Sturridge, Luis Suarez and Steven Gerrard all completing 90 minutes, meant the Blues might have an advantage at Anfield, Martinez shook his head. “No. I think top players have the mentality to play three games a week. If anything there is a risk of injury, that’s what you pick up at the end of the month, but it’s not going to have an effect on the game at all.”

To those looking in from the outside, however, Martinez appears to have more belief in his fringe players than his opposite number. Sylvain Distin, still recovering from a hamstring injury, is considered touch and go for tomorrow, but Martinez said the 19-year-old John Stones would cope with the occasion. “When John came to the club [from Barnsley this time last year] he was more a right-back, but I see him more as a centre-half and he’s ready now”

Lacina Traore, the tall Ivorian striker whose signing on loan from Monaco until the end of the season was completed on Saturday, will not figure. “We’ll assess him, but I’m not too worried about Tuesday, more about being able to have him fully fit for the remainder of the season,” Martinez said. “Especially the last nine games, that’s where I see him being important, because Romelu Lukaku, obviously he cannot play against Chelsea, so it’s important [Traore] is fit for that period.”

Steven Naismith, who scored Everton’s first two goals, was another to demonstrate his worth and the quick feet of Aiden McGeady, making his first start for the club, had the Everton fans in raptures.

While he is unlikely to get as much room in the Premier League as he did to run at the Stevenage defence, the manner in which he repeatedly left the full-back Peter Hartley floundering suggests the Republic of Ireland international will add another dimension to the Everton attack.

The prospect of Martinez becoming the first manager to retain the FA Cup while managing a different club is now a very real one. “What’s important is the group has a competitive edge and the squad is big enough to face the competition,” he said. “From now until the end of the season, would being involved in every round of the FA Cup stop us from being successful in the league? The answer is no. We need to go as far as possible in the FA Cup to fulfil our potential in the league, that’s how strongly I feel that could help us.”
Guardian Service