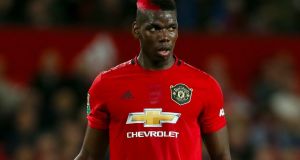 Manchester United’s Paul Pogba will not be sold in January, according to manager Ole Gunnar Solskjaer. Photo: Richard Sellers/PA Wire

Ole Gunnar Solskjær has denied Paul Pogba will be sold in January, though Manchester United’s manager refused to offer details of the ankle injury that has ruled out the midfielder since late September.

Pogba’s recovery has been hampered by a recent illness, Solskjær said this week, and the future of a player who stated in the summer he wanted “a fresh challenge” has again been the cause of speculation.

“He’s not getting sold in January,” Solskjær said.

Pressed that the player’s injury seems have caused a particularly long absence, Solskjær concurred but declined to shed fresh light on it.

“It was something that really needed sorting but I don’t think I should give you all the medical information,” the Norwegian said. “But he’s now feeling good and getting better. It’s worked [his rehabilitation].”

Solskjær acknowledged that the view that Pogba could leave will be deflected only once the France international is fit again.

“When he comes back and plays well, with a smile on his face, and does what he did a year ago when I came here [it will end],” he said. “Paul has been fantastic and we’ve got one of the best players in the world.”

Pogba may not play again this year. “I hope [he might],” Solskjær said. “Let’s see how he feels, I’m not going to push him.”

Solskjær also denied reports that Red Bull Salzburg’s Erling Braut Haaland was on a flight from his native Norway to Manchester on Friday morning to meet him. The manager is interested in the 19-year-old striker, who has scored 28 times in 22 games this season.

“I don’t think he’s en route here, to be fair – not through me anyway,” Solskjær said. “You know I can’t comment on other teams’ players. I’ve said that many times and it’s one of those things in this job – you get speculation a lot of the time.

“He’s not coming to Manchester … I know the boy and his friends and he’s on a Christmas holiday. You can’t fly anywhere [from Stavanger], you need to go via [elsewhere].” – Guardian

1 Sky Sports customers set to save on bills until Premier League returns
2 ‘This is sick’ - seventh-tier Swedish club cancels friendly after betting mayhem
3 Gerry Thornley: Changes to tackle laws could transform rugby by time of next World Cup
4 Jack Grealish needs to show that his remorse is real this time
5 My favourite sporting moment: Phil Mickelson’s miracle shot at the 2010 Masters
Real news has value SUBSCRIBE