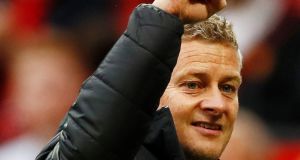 A delighted Manchester United manager Ole Gunnar Solskjaer after Sunday’s match. ‘You have got to go for it,’ he said. ‘It’s risk and reward and today we were rewarded.’ Photograph: Jason Cairnduff/Reuters

A 17th-minute penalty from Marcus Rashford before a second from the forward after the break, along with strikes from Anthony Martial and Daniel James on 67 and 81 minutes, respectively, secured a confidence-boosting victory in what is expected to be a season of transition for United.

This left Solskjaer delighted. “As we said to the boys before the game, we have found the way we want to play and a way we believe in,” he said. “You’ve just got to go out and do the same. We took risks but that’s the way here. You have got to go for it. It’s risk and reward and today we were rewarded.”

Solskjaer also praised new signings Harry Maguire, Aaron-Wan Bissaka and Daniel James as Manchester United routed Chelsea 4-0 at Old Trafford on Sunday. Maguire, Wan-Bissaka and James were bought for a combined £145 million in the summer and each enjoyed memorable debuts. While Maguire and Wan-Bissaka started, James was a late replacement.

Solskjaer said: “We’ve signed three fantastic boys, three fantastic personalities and we are delighted with them. He’s [Maguire] done exactly what we’ve signed him for, his presence in both boxes, his calmness and composure on the ball. He’s a leader and with him, David de Gea and Victor Lindelof, they marshalled that back line really well. It is important to have strong personalities at the back.

“Dan has made a great impact and it is the best feeling ever scoring a goal in front of the Stretford End – you can’t beat that.”

While Wan-Bissaka was involved in Rashford’s 65th-minute strike, Solskjaer was pleased with United’s display following the interval. “The second half was outstanding, defended well in shape and counterattacked well,” he said.

In the close season Solskjaer placed emphasis on improving the conditioning of players. “The fitter you are, the more you can do. It’s as simple as that,” the 46-year-old said. “The boys have been working hard but this is still the start, we can still get some hard work in.”

While Martial started in the number nine position he occupied in pre-season, Rashford was asked to play wider. “Marcus Rashford played that left hand/striker role to perfection today”, said Solskjaer. “Once in a while he is caught out defensively but that means he can counterattack. His second goal was absolutely outstanding – that’s where we want him, running in behind and not on the touchline crossing in. Martial’s goal was a typical number nine goal, that’s where I want him [close in] and he knows that. That’s where the number nines get the goals.

Rashford said: “It was a good start – in the first half we could have been a bit sharper but it is to be expected in the first game. In the second half we looked sharper and the fitness work we have been doing over the summer pulled us through.”

Frank Lampard’s team were bright in passages but Chelsea’s manager was left bemoaning a lack of focus.

“We made four mistakes and they put them away. It is a reality check for us all‚” he said. “We are Chelsea. We don’t want to come here and lose 4-0. It wasn’t a 4-0 game for long periods but we need to accept it.”

He also defended his selection of Mason Mount following criticism from José Mourinho, the former Chelsea and United number one. “He didn’t like the performance – is that what he said? I don’t have to worry too much about [that] , said Lampard.