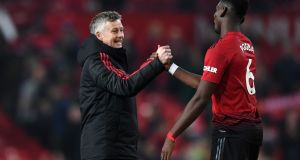 Ole Gunnar Solskjær: “With Marcus back, Bruno and Paul back, you’d expect us to be more exciting.” Photograph: Gareth Copley/Getty Images

Ole Gunnar Solskjær says he would not force any Manchester United footballer to play if they did not feel “mentally ready” due to concerns about coronavirus.

The Premier League hopes to get the go-ahead for a mid-June return and Solskjær has all his squad back in the country for a potential resumption of training. Yet the manager is conscious some may have reservations about doing so.

“You wouldn’t hold anything against them – if a player is not mentally ready to play I don’t think we could force anyone,” Solskjær told Sky Sports News. “They’ve not raised too many concerns, but of course we trust the experts, the health officers.”

A resumption with games played at neutral venues is proposed. “Football has always been about the fans, the environment we play in and the atmosphere,” he added. “But these are strange times. Whatever they decide it’s going to be a boost for everyone to get football back on. I’m just hoping we get a safe solution soon.”

Adjustments will be required. “You’re used to the connection with the boys, shaking hands, giving them a hug. Now with all this, that’s gone, so that’s my main concern, how we get back and how we’re going to build that environment again.”

Paul Pogba is fit to play for the first time with Bruno Fernandes, who has made an impact in his nine appearances, and Marcus Rashford should be available following a back injury. “With Marcus back, Bruno and Paul back, you’d expect us to be more exciting,” Solskjær said.

United sit fifth, three points behind Chelsea, have reached the FA Cup quarter-finals and are set to make the same stage of the Europa League, with a 5-0 first-leg lead over Lask.

“We’ve always got this pressure at Man United of trophies, winning the next game,” Solskjær said. “We’ve been through a difficult season, a rebuild. I think everyone knows that and has seen that. And I think we’re starting to see something exciting.” – Guardian