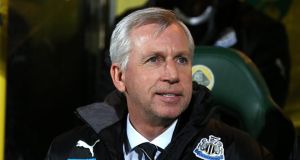 Newcastle United manager Alan Pardew sais he was “sad” to see the club’s director of football Joe Kinnear leave St James’ Park, even though the two reportedly did not work well together. Photograph:

Joe Kinnear may have exited stage left but the impression of Newcastle United as a club in chaos was reinforced yesterday. It emerged they have suspended reserve team manager Willie Donachiefor “disciplinary reasons” after he allegedly hit one of his players following the under-21 side’s 2-0 defeat at Sunderland on Monday.

The 62-year-old former Manchester City and Scotland full back has been told to stay away from the training ground while Newcastle conduct an investigation into the events at the Stadium of Light.

Donachie was furious at a performance which came 48 hours after Newcastle’s first team had lost 3-0 at home to Sunderland and at a time when Mike Ashley, the club’s owner, has made it clear he expects youngsters to start graduating into Alan Pardew’s senior side.

Angry dressingroom exchanges are understood to have ensued, leading to a fight during which Donachie allegedly struck 19-year-old defender Remie Streete, who had conceded a penalty.

When a complaint was made to Newcastle’s hierarchy, Streete had a meeting with Pardew. Donachie was then suspended and an investigation opened.

Pardew has claimed he was “sad” to see former Wimbledon and Newcastle manager Kinnear leave this week, even though he never wanted Kinnear appointed as the club’s director of football last June, frequently found working with him frustrating and has not spoken to him since his departure, Pardew straight-batted questions about his ousting.

“I’m just said to see anybody lose their job, as Joe has,” he said. “He did a lot of good work here. But that decision was the board’s decision. I was surprised that the decision was made at that time but it was not my decision. I have not spoken to him since but I’m sure I will do.” –
Guardian Service