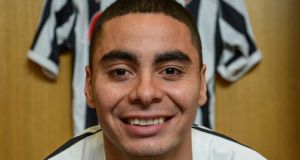 Miguel Almirón described his high-profile switch as both “something beautiful” and “a big responsibility”. Photograph: Getty Images

Miguel Almirón has become the most expensive signing of the Mike Ashley era at Newcastle United, with his £21 million (€24 million) move from Atlanta United finally eclipsing the £16.8 million (€19.2 million) fee the club paid Real Madrid for Michael Owen in August 2005.

Ashley’s near 12 years as owner have been characterised by budget buys but perhaps motivated by real fears that Rafael Benítez could be on the point of quitting as manager, the retail tycoon belatedly sanctioned a long-mooted deal for the Paraguay playmaker.

The 24-year-old was very much the star of the Major League Soccer side Atlanta and Benítez trusts he will fill the number 10 position that has long been a problem role at St James’ Park. For his part, Almirón describes his high-profile switch as both “something beautiful” and “a big responsibility”.

He has agreed a 5½-year deal and his first priority will be to help create – and score – the goals required to relieve Newcastle’s relegation fears and keep them in the Premier League.

For his part, Ashley trusts that his presence may not only persuade Benítez to extend a contract which expires in May but also prevent a sharp dip in season ticket sales.

Capped 13 times, Almirón’s quick feet and link play helped Atlanta win last season’s MLS Cup and he was selected in the MLS Best XI at the end of both of his seasons with the Georgia-based club. He is likely to make his debut at Wolves on Monday week as he will not have completed the necessary visa formalities in time to be involved at Tottenham on Saturday.

Newcastle have agreed to pay £16 million (€18.3 million) up front and will supply the remainder in instalments contingent on appearances, goals and the team’s league status. His arrival represents the conclusion of a long, often tortuously slow, pursuit on Benítez’s part and in a rare public statement, laden with political subtext, Lee Charnley, the managing director, apologised to the manager.

“Rafa has wanted Miguel for a year,” Charnley said. “I appreciate he’s had to wait longer than he would have liked. I’d like to thank Rafa for his patience.”

Having finally made it to Tyneside, Almirón cannot wait to get started. “I’m very happy and eager to start and to meet my new team-mates,” he said before revealing the raison d’etre behind his transatlantic journey. “The league is very competitive, this is a historic club, and Rafa Benítez himself were the main reasons why I am here now. I think it is a great responsibility, something beautiful for me, and I will try to offer the best I can to repay the trust the club put in me.”

An evidently relieved Benítez, who has also welcomed Antonio Barreca, a former Italy Under-21 left-back or wing-back on a £1 million (€1.1 million) loan deal from Monaco, said: “We were following Miguel Almirón for a while and we saw a player with some pace in attack who can play behind the striker. We have someone who can score goals and give assists.

“We know that MLS is a different challenge to the Premier League but he has the potential to do what we are expecting, and what we need. From talking to the lad, you can tell that he is really focused and wants to do well. He wants to be successful and he wants to help the team. His impact in MLS has been really good – he’s been one of the best players this year – and hopefully he can give us more competition and more quality in the final third. I am pleased that the hard work behind the scenes has ended positively and I thank everyone for their efforts.”

Back on a sunny day in August 2005 15,000 fans turned up at St James’ Park to see the freshly recruited Owen paraded on the pitch but although Almirón has arrived with considerably less fanfare, the hope is he will prove a much more effective buy than the former England striker whose time on Tyneside was plagued by injuries.