Newcastle and Pérez repeat a little history against Spurs 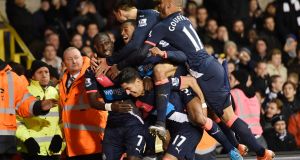 Ayoze Perez is mobbed by his Newcastle United team-mates after scoring a late winner in the Premier League game against Tottenham Hotspur at White Hart Lane. Photograph: Toby Melville/Reuters/Livepic

Newcastle United had not won back-to-back Premier League fixtures since November of last year. They had not won three straight at White Hart Lane since 1911. And when they trailed at half-time to Eric Dier’s headed goal, the historians did not appear ready to be troubled.

Steve McClaren’s team, though, produced an eye-catching revival, which culminated in the substitute Ayoze Pérez embarrassing Hugo Lloris with a low shot at the very end. McClaren could revel in the changes he made.

Earlier, his second substitute, Aleksandar Mitrovic, had pounced to equalise from close range and it was remarkable how history had repeated itself in another sense.

In the corresponding fixture last season, Tottenham had led 1-0 at the interval only to cave in to lose 2-1, with Pérez scoring the winner. His goal here followed Mitrovic’s flick-on and an assured first touch. The second was a rasping low shot that Lloris could not keep out.

This was supposed to be the day when Tottenham moved into the top four but instead, they suffered their first loss since the opening day of the league season. Their momentum, rather abruptly, was stalled and the result allowed Newcastle to build on their home win over Liverpool from the previous Sunday and climb out of the relegation zone. There was the smattering of boos from the White Hart Lane crowd at full-time.

It was attritional stuff for much of the first half but Tottenham had initially advertised their streetwise edge by imposing their will on proceedings. They were the better team in the first half and they took the lead into the break.

McClaren had reason to curse because, by and large, his team had restricted them. And, obviously, because no manager ever wants to concede the opening goal from a set-piece. Christian Eriksen whipped over the corner from the left flank, an inswinger with his right foot, and Dier had stolen away from his defensive shackles in front of the near post.

He generated power in the flicked header and Rob Elliot’s fingertips could do nothing more than divert the ball into the far top corner. The thought occurred that if Elliot had not got anything on it, Vurnon Anita, covering on the back post, might have had a better chance of clearing it. It was Dier’s third goal of the league season, which is a pretty decent return thus far for a defensive midfielder.

It said everything that one of the biggest cheers of the first half came when the referee, Roger East, slipped over, although it should be said that this never fails to provoke raucous amusement. There was also the moment early on when Siem de Jong took a pass from Papiss Cisse and unloaded a shot that was bound for the far corner. It hit Cisse, who had continued his run, and wiped him out.

The pickings had been slim until Erik Lamela, fresh from his hat-trick in last Thursday’s Europa League home win against Monaco, roused himself. He watched Elliot claw away his first-time effort on 36 minutes, after Danny Rose’s smart cut-back while almost immediately, from Harry Kane’s flicked header, he surged through, showing the strength to withstand Paul Dummett’s challenge.

Lamela’s poked shot was bound for the roof of the net before Elliot showed excellent reflexes to tip over. From the corner, Dier scored and there was time before half-time for Rose to flash a low shot past the far post, with Kane sliding in just too late.

Newcastle were on the back foot and they had to do something that they had previously managed only three times in seven away games – score a goal.

Cisse was at the sharp end of some of their best moments only he was not quite sharp enough.

He had headed well wide from Dummett’s cross in the first half while he had two further sightings in the second half before he was withdrawn. On the first, after Moussa Sissoko’s surging run and pass, he fizzed narrowly wide of the far post and on the second, his header from Sissoko’s cross lacked power.

Kane worked Elliot from distance in the 53rd minute but the second half came to belong to Newcastle, who showed a hearty appetite for the fight, which bodes extremely well for them.

Sissoko broke on several occasions and it was surprising to see how many of Tottenham’s players faded or how they collectively lost control. Sissoko finished as the game’s outstanding player, having helped to drive the fightback but there were plenty of other heroes alongside him.

Newcastle deserved the equaliser and it came after Rose had been penalised for repelling Daryl Janmaat’s cross from the right flank with his hand.

Jack Colback’s free-kick was deep and when Fabricio Coloccini headed back, Chancel Mbemba nodded goalwards. Lloris half-saved but the ball rolled away from him and Toby Alderweireld and, from all of 15 centimetres, Cisse’s replacement, Mitrovic, stabbed home.

Thereafter, there was only one team that was going to win. Mitrovic ought to have settled it in the 90th minute only to somehow fail to apply a touch to Sissoko’s low cross but Pérez ensured that there would be the happiest of finales for his team.