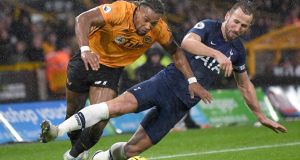 Wolverhampton Wanderers’ Adama Traoré gets taken out by Harry Kane as Tottenham set out stop the flying winger at all costs. Photograph: Michael Regan/Getty Images

‘That son of a bitch kept his arm out and rammed it into my jaw. It wasn’t a kick this time, it was a punch – bam!”

One of the best bits in Diego Maradona’s book about the 1986 World Cup is his weirdly sensual description of being kicked to pieces by the entire South Korea team during Argentina’s group game in Mexico City. The South Korea manager had made a big deal beforehand of not man-marking Maradona. “Instead he sent his whole team out to lay into me,” he notes of a game in which he was fouled 11 times in brutal choreographed rotation.

This was just the way people dealt with the world’s most valuable footballer back then. During a qualifier in Venezuela the previous year Maradona’s marker had literally followed him off the pitch as he got his boot fixed and stood on the touchline with his back to the game, like a violently overattentive Victorian manservant. Maradona scored. Argentina won. But football could be a wild, dark place in those days.

At which point enter, with a quiet little waft of death, the thrillingly humble figure of José Mourinho, who spent last weekend gushing over Wolves, while on the pitch his team kicked their way to victory with the help of a co-ordinated 12-minute assault on the body of Adama Traoré.

The reeling-in of Traoré was wrong, unsporting and dangerous but it had something else too, a note of clarity – even, whisper it, a kind of hard sporting beauty. In praise of cheating. This might seem like a hard sell. But bear with me.

Spurs had already tried doubling and trebling-up on Traoré. It didn’t work. Traoré is too clever these days, slowing down, then burning off into the space. It is a rare thing in any sport but when he gets his timing right it is simply impossible to stop him.

Or so it might have seemed. With Spurs bleeding to death on that side Traoré was chopped down three times by three different players between the 68th and 82nd minutes, all three drawing yellow cards, the tackles flying in like a series of applause-drenched encores.

It worked though. A particular favourite was the second yellow card, an exhausted slide-trip from Eric Dier, who had spent much of the match chasing Traoré with all the easy athleticism of a man in an antique diving suit completing consecutive charity marathons. Best of all was Harry Kane, who produced an improvised spinning roundhouse followed by a baffled shrug of the shoulders – not angry just sad – as the final yellow card was flourished.

It was done to order. It was a jolly bad show. It was the kind of thing the old-school voice of thundering journalistic piety would single out as All That’s Wrong With Football. And yet at a time when football has found a lot of other things to be All That’s Wrong, when the toxicity register has gone global, heading off into the realm of existential moral compromise, it felt oddly bracing. Frankly, I loved every second of it.

The first thing worth saying is that these are legitimate tactics. Rotational fouling has evolved, become more complex and embedded. Manchester City do it with great skill. Spurs at their best under Mauricio Pochettino were excellent at “killing the transition”.

This is a good thing. Football is not a demonstration sport. There are many different types of beauty within it, not simply those than can be expressed in a three-second clip and a selection of approving emojis. Fouling, physicality, rule-bending: all of these things ennoble and amplify attacking brilliance. Without resistance what value is there in scoring 56 goals a season and dribbling through a defence unskilled in the art of prevention at all costs?

Molineux was something else though, an old-school chainsawing. There is a dark genius in being able to persuade a team of Champions League finalists to play like this, to become South Korea 1986, to see only winning and ways of winning. From one angle it feels like further evidence Mourinho may be a good fit with a group of very good players who have never actually won anything and who may be willing to submit fully to his will.

There was a hint too of the way Kane may add something to his palette in his late peak years. There has always been an anomaly in the idea of Kane as the leading player in a team famed for their lack of winning mentality.

Kane is not this. He is instead an utterly hard-nosed sporting entity. This is a player who should at this stage be cashing in his deadly finishing, pushing his team across the line, making up for diminished mobility in pure, pragmatic will. José and Harry: it is perhaps what Kane has been waiting for.

There is something else too. If it feels transgressive to praise traditional notions of ugliness and impropriety, then it is also worth noting the game has changed. Why should the urge to win at all costs seem bracing? Perhaps because nobody was trying to sell you anything here. This was not an expansive brand of football, or an attractive philosophy, or an on-brand heritage product.

This was instead the opposite. It was bad product, a familiar absorbing ugliness enacted by a manager who would hack you down in a game of park football just the same and who wants to be in the Champions League because he believes he’s a tactical genius, not because of shareholders or eyeballs or how it looks in China.

Mourinho, keeper of the flame. Funny isn’t it? But then pure gamesmanship, pure cynicism: this is still a kind of purity. Not to mention quite a good way of winning. – Guardian

Antoine Rozner pips Andy Sullivan in Dubai smash and grab 12:54
Wallabies fall short as they draw with Argentina in the rain 11:38
Emiliano Grillo storms into the lead in Mexico 08:36
Jim McGuinness: Cavan need illogical courage and variety to down the Dubs 07:00
Ireland retirement was ‘hardest decision’ for David McGoldrick 06:30