Arsenal boss: ‘I’m expecting a player that is not playing to feel hurt and disappointed’ 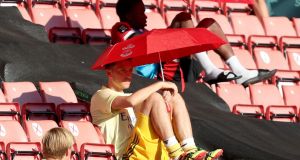 Mikel Arteta wants Mesut Özil to feel “hurt and disappointment” at his continued absence from the Arsenal team and has again challenged him the player to show he is prepared to operate at his full potential over the remainder of the season.

Özil has not featured since the Premier League restarted a fortnight ago, remaining on the bench at Brighton and Southampton after being dropped altogether from the squad that faced Manchester City. Arteta said after the defeat at the Etihad Stadium that he would select the playmaker “when I think he can give his best”.

The German’s omission from the FA Cup quarter-final win at Sheffield United on Sunday was attributed to a minor back injury, which could rule him out when Norwich visit on Wednesday, but his the manager said intense frustration at being overlooked earlier should be taken for granted.

“I’m expecting a player that is not playing to feel hurt and disappointed,” Arteta said when asked specifically about Özil, who had been a regular starter under the Spaniard prior to for him before the Covid-19 shutdown. “I believe he’s not very happy because he’s not playing, but as well he picked up an injury the other day and we have to wait and see how he evolves.”

Matteo Guendouzi was also left out of the past two games amid speculation over his future and, referring to both players, Arteta repeated his common refrain that nobody showing the right attitude would be excluded.

“I said that everybody that I have in the squad, my job is to get the maximum out of them and to try and help them and support them. And if they are willing, everybody is welcome. I always hope that the players want to give their best.”

It was hardly a ringing endorsement of either player. Özil, who is entering the final year of what looks a punishingly expensive contract given Arsenal’s current financial concerns, seems unlikely to have a long-term future at the club but Arteta emphasised that his wages haved never been a factor in team selection.

“That is an agreement that the player and club were happy to do, to move ahead, and it is never [something]that I question,” he said. “I think players are paid whatever they deserve because there are two parties here and that should never be something I have to judge.”

Arteta confirmed William Saliba, the 19-year-old centre-back who has spent the season on loan with his former club Saint-Etienne, will remain there until after the Coupe de France final against Paris Saint-Germain on July 24th. - Guardian

1 Mary Hannigan: ‘Bitches Who Stood’ might be better viewed as useful allies
2 Leinster’s clash with Saracens will open Champions Cup quarter-final weekend
3 Game Changers: Living beyond fear puts Alex Honnold above all others
4 James Cronin anti-doping case may be reopened
5 ‘Everyone would play tomorrow if we could’ - Johann van Graan
Real news has value SUBSCRIBE