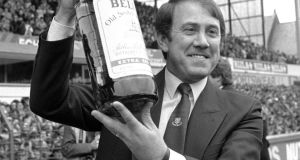 Former Everton player and manager Howard Kendall with his Bell’s Manager of the Year Award in 1985 at Goodison Park after his team’s title triumph. Photograph: PA Wire.

The radio was almost shaking. It sounded like thunder was pulsing through it. Last Saturday afternoon Goodison Park and Everton were saying farewell to Howard Kendall. They did so with the sort of ovation that emphasised what football can do to people: the power to move, to produce unforgettable memories, to stir the soul.

Before taking charge of his first Everton game at Goodison Park two years ago, Roberto Martinez searched for a fitting description of the great old ground and said: “Goodison is a feeling.”

It was an apt remark last Saturday.

Four days on, sitting in a student bar surrounded by twentysomethings watching Manchester United’s sometimes drab draw at CSKA Moscow, there was an absence of such noise and such feeling.

Then Anthony Martial scored and the hubbub began. It was his fifth United goal since his debut in the middle of last month.

Martial is stirring people they way Kendall once did in the Everton midfield, long before he did it in the Goodison dugout. What becomes apparent, and what is fresh, is that Martial has the potential to be a new hero for a new generation of particular fans. Even at 19, or maybe in part because he is 19, Martial can be their inspiration.

The following morning, this in turn led to thoughts of a man called Faas Wilkes. On hearing the sinking news of Johan Cruyff’s cancer diagnosis, there was the memory that even the heroes of the game have heroes. Sometimes these are surprises, players who are local heroes as well as, or not, being national figures.

Cruyff said that all-time great Alfredo Di Stefano was an early idol of his as he grew up in Amsterdam in the 1950s and early ’60s, but Cruyff also often mentioned a much less well-known figure: “Faas Wilkes was always an example to me,” he said.

Faas Wilkes was known in Holland, where he played for Fortuna Sittard (then Fortuna 54) after a career abroad at clubs such as Valencia. Wilkes also played for the Netherlands. Cruyff liked him for his technique and balance.

Sometimes these personal choices make you realise that even the great participants possess that emotional connection that we think is reserved for us dreamers on the terraces hoping to one day pass a ball like Jimmy Cleary.

Zinedine Zidane always nominates Enzo Francescoli as his hero, based on one season in Marseilles, and Paul Scholes chose Oldham Athletic’s Frankie Bunn. As for Kendall, he loved George Eastham’s midfield grace. Kendall also admired Danny Blanchflower, so much that he once wrote to Blanchflower asking him about a trick he’d seen the brilliant Irishman perform during a Tottenham match.

Blanchflower didn’t write back, but Kendall had the connection.

At a time when it is all too easy to feel the disconnection – Fifa, ticket prices, unending hype – Goodison Park’s reaction last Saturday was a reminder of what is good about the game.

It is the same with Johan Cruyff. The response to Thursday morning’s news that Cruyff has lung cancer was every bit as thunderous and heartfelt as the strenuous applause booming from Goodison.

Cruyff, of course, is global. The noise around him has been on that scale since he first emerged as a chiselled teenager at Ajax in 1964 and here, half a century on, we are still enraptured by what he did on the pitch.

Cruyff made you love the game so much that even in what was supposed to be his finest hour, but which ended in defeat – the 1974 World Cup final – the memory is with the losers. That Dutch team makes a nonsense of the idea that winning is everything. They won more admiration – and inspired more devotion – than other teams have done in victory.

Johan Cruyff was its emblem and when he took his athletic intellectualism into the dugout at Barcelona, he changed modern football. Unfortunately the change has had some negatives. Via Cruyff’s protégé, Pep Guardiola, the fascination with Barcelona’s passing and possession – and counting it all – has led to this numbing focus on statistics.

The ‘stats’ were trotted out again on Tuesday as Bayern Munich monopolised possession, then lost to Arsenal. Defeat doesn’t make Bayern’s approach wrong, unless all you’re interested in is winning.

And football, sport, isn’t all about winning. “For me,” Cruyff said, “football is emotion.”

Despite his advocacy, emotion gets a bad press these days. It’s not clever enough.

But Howard Kendall understood it and Goodison Park understood it. The Anfield Wrap, written by and for Liverpool fans, have delivered a superb salute to Kendall and their city rivals. They understand it.

Johan Cruyff understands it. As he once said: “I could never work for AS Roma. They have a running track around their pitch. That’s the worst thing there is.”

There probably are worse things, Johan, but we know what you mean. Get well soon.

Howard, farewell. You’re up there.