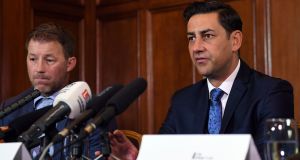 Former footballers and victims of abuse Steve Walters and Andy Woodward who have helped to bring the topic of sexual abuse to the fore. Photograph: Paul Ellis/AFP/Getty

The Metropolitan police said a team of specialist officers from its sexual offences, exploitation and child abuse command would probe allegations of “non-recent” crimes – but refused to say which clubs it was investigating.

“We take all the allegations we receive very seriously and they will be dealt with sensitively,” said DCS Ivan Balhatchet, who is part of the Met’s sexual offences, exploitation and child abuse command.

“Anyone who has been a victim of sexual abuse, whatever the circumstances, or has any relevant information should contact their local police or the NSPCC.”

More than 20 former footballers – including ex-youth players, trainees and professionals – have also come forward with allegations of abuse since former Crewe defender Andy Woodward waived his right to anonymity to say he was a victim of sexual abuse in an interview with the Guardian.

The English Football Association (FA) have launched a review into allegations of children being sexually abused at professional clubs, while British police are also investigating mounting accusations of paedophile activity.

“It has to be taken seriously. There must be zero tolerance from that point of view, from a football perspective, but also from a criminal perspective as well,” Infantino told reporters in Singapore on Thursday.

“Those who have been guilty of abusing children need to punished very seriously. They have to be out of football, that is without question, but also on the criminal side they need to be punished. There are not many worse things in life, not in football life but in life generally, than child abuse.”

Infantino said that although child abuse was a scourge not limited to football, Fifa would not take the scandal lightly.

“The Football Association is already, of course, looking into that matter and this is something that to be taken very seriously,” he added.

“In football as well, we probably have to look into that with more care and more attention in order to prevent any potential child abuse in the future.”

1 Dan Tuohy explains ‘rotten to the core’ comments
2 Six Nations: No place to hide for Ireland’s misfiring captain
3 Questions raised over Ireland v Italy fixture due to coronavirus
4 England 24 Ireland 12: How the Irish players rated at Twickenham
5 McIlroy takes his foot off the pedal and will skip the Honda Classic
Real news has value SUBSCRIBE