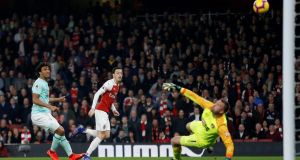 Mesut Özil opens the scoring for Arsenal in the Premier League game against Bournemouth at the Emirates stadium. Photograph: Ian Kington/AFP/Getty Images

At times like this all seems swell in Mesut Özil’s world. Under the gleam of the lights, finding space and time on a football pitch, his talent unfurled again. Arsenal’s enigmatic playmaker, who has looked like Unai Emery’s type all too infrequently during this problematic season, illuminated this match with an exhibition of golden touches.

Yes, there is the caveat that Bournemouth are on a painful losing run away from home. Yes, it’s pretty unlikely he will be trusted with the intensity of Tottenham away on Saturday morning. But yes, even Emery must have gone home wondering, scratching his head at how the player who has been his biggest battle this season could also look like such a blessing.

Özil scored, assisted, and generally shone. No sign of backache, the sniffles, or a mood, he looked contented just to enjoy playing. The team looked like they were enjoying him in this zone too, as Arsenal seized the opportunity to express themselves against a team who shared their trait for looking like they could concede a chance at any time – only moreso. With a testing week coming up with matches against Tottenham, Rennes and Manchester United, that booster came at a convenient time.

Arsenal fans have come to expect more or less anything when it comes to selections and formations. His selections are routinely unpredictable, and for a game against an opponent struggling away from home and missing key personnel, he plumped for a back three with wing backs. It might not have been the most ambitious strategy, and might have been chosen with an eye on a big week coming up, but nobody complained when Arsenal struck early.

There wasn’t much of a deadlock for Arsenal to unpick and they were ahead in the fourth minute when Özil was found in such ample space that even a man of his fondness for assists could not turn down the invitation to shoot. He dinked the ball with his heel and a hint of backspin and it floated sweetly in. It was, perhaps, not Artur Boruc’s finest moment as he swiped at the ball but without the substance to make much of a difference. Özil was engulfed in a group hug.

Arsenal were able to attack with some conviction. Henrikh Mkhitaryan enjoyed room to exhibit flicks and tricks. Pierre-Emerick Aubameyang lurked, toying with the fine offside line, keen to hunt down an opportunity.

The attacking combinations created a second goal which was beautiful in its simplicity. Bournemouth had to take their share of the blame for ceding possession clumsily, but once Mkhitaryan captured the ball Arsenal found the attacking groove they crave in these parts.

The Armenian slid the ball to Özil, whose return pass was guided to land so Mkhitaryan did not have to break stride to score. Özil’s name rang freely around the Emirates.

Bournemouth rallied and found a route back into the game. They had threatened once already midway through the half, with Ryan Fraser and Andrew Surman denied in quick succession. It showed determination to claw back a goal so soon after Arsenal looked like disappearing into the distance. Dan Gosling’s pressing as the home team tried to play out from the back reaped its reward. The midfielder snaffled the ball off Mattéo Guendouzi, who was badly punished for dallying, and centred for Lys Mousset to tap home.

Both teams appealed for penalties. Josh King was booked for diving and Laurent Koscielny ignored when he felt he was impeded.

Arsenal restored their cushion early in the second half as Mkhitaryan drove in a cross and Koscielny’s deflected shot bounced off the post and too awkwardly for Boruc. Aubemayang followed up to make sure, but the goal line technology system later awarded the goal indisputably to Koscielny.

Back came Bournemouth through the energetic Fraser, and the Scot was kept out with a solid save from Bernd Leno, before Gosling whacked a dipping shot against the crossbar. But Arsenal eased further in front when Mkhitaryan’s pass encouraged Aubameyang to switch on the afterburners. The striker jinked past the onrushing Boruc and steered in unerringly.

The substitute Alex Lacazette iced the cake with a superb free-kick. – Guardian

Southampton moved out of the relegation zone with a crucial 2-0 home win against struggling Fulham at St Mary’s, their first victory in five Premier League games.

Oriol Romeu gave Southampton the lead in the 23rd minute, beating Fulham goalkeeper Sergio Rico with a shot through a crowd.

Fulham enjoyed lots of possession but their weaknesses at both ends of the pitch were all too apparent as Southampton doubled their advantage before the break.

Aleksandar Mitrovic had just scuffed a good chance wide for Fulham when Southampton attacked down the left and Nathan Redmond’s low cross was parried by Rico to James Ward-Prowse who swept in the rebound.

Despite some neat build-up play Fulham lacked any cutting edge as Southampton comfortably held out for the victory that moved them two points above Cardiff City into 17th place.

Second-from-bottom Fulham are now 10 points behind Southampton and looking odds-on for an instant return to the Championship.