Mesut Özil in talks to join Fenerbahce on loan 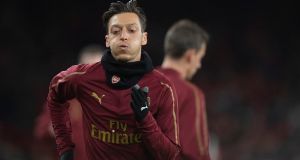 Mesut Ozil could be leaving Arsenal on a loan deal this month. File photograph: Getty Images

Mesut Özil is in talks to join Fenerbahce on loan but Arsenal have indicated they do not want to pay any part of his salary should he move to the Turkish club for the rest of the season.

The former Germany international’s contract with Arsenal runs out in the summer, bringing to an end nearly eight turbulent years at the north London club. The Arsenal manager, Mikel Arteta, explained this week that Özil’s future should be resolved shortly.

“I’m saying we will decide what’s happening in the next few days,” Arteta said when asked whether Özil could remain at the club. “I don’t know what is going to happen. Obviously now he’s free to negotiate with other clubs. We will discuss internally what the best solution for him is for the near future, obviously with the player and agent too, and try to find the best solution for everyone.”

Özil last played a game for Arsenal on March 7th last year, against West Ham in the Premier League, and it is clear that he will not feature again for the club. The 32-year-old earns £350,000 a week at the moment and Fenerbahce are working on trying to find a solution to the fact that Arsenal are currently not willing to pay any percentage.

Major League Soccer also remains an option for the World Cup winner with DC United the most likely destination. However, the player’s preference would be a move to the Super Lig. - Guardian