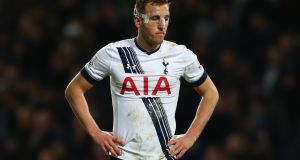 Harry Kane: the 22-year-old has scored 19 times for Tottenham this season, plus two for England, but he has none in his past four appearances. Photograph: Clive Rose/Getty Images

The player suffered the injury when he was caught by an elbow and he underwent an operation to fix it. He missed the Europa League last-32 second leg against Fiorentina because he had had a general anaesthetic the day before and has since not scored in league games against Swansea City and West Ham United.

In the 1-0 defeat at West Ham, Kane missed a couple of chances when he was fractionally too slow to react, and Pochettino wondered whether the mask had affected his peripheral vision, which, the manager pointed out, was vital for creative players.

“He’s playing with a mask and sometimes it can disturb you,” he said. “Maybe it’s easier for Nemanja Matic [the Chelsea defensive midfielder, who has worn a mask] or different players that play behind, because creativity is not their problem. But you need to be sharp when you are offensive and creative.”

“Against West Ham, Harry had two or three clear chances to score,” Pochettino said. “He was unlucky. It happens. I have full confidence in him. Sometimes, there is a period in which it is difficult to score. He is not a machine.

“Harry is still learning about how to deal with being a leader and top scorer and one of the key players at Tottenham and the national team. It is not an easy job, but we are happy in the way that he has developed his leadership.”

Kane did not realise that he had broken his nose against Palace and he played until the end. Typically, he has shrugged off the inconvenience of the mask. “Once you start playing, you kind of forget it is on,” he said. “It’s all good.”

Kane’s focus is on the north London derby at home to Arsenal on Saturday, a fixture he decided last year with two goals.

Tottenham fans have dreaded an injury to Kane, so they can be relieved that it is only his nose he has hurt.

Meanwhile, Arsenal manager Arsène Wenger has cast aspersions on the opinion of his old protege Thierry Henry on the subject of supporter unrest, in the build-up to Saturday’s north London derby.

Henry, Arsenal’s record goalscorer, declared in his column in the Sun newspaper that he had “never heard the Arsenal supporters as angry as they were at the Emirates on Wednesday night”, after the 2-1 defeat to Swansea City.

When these comments were put to Wenger at his weekly press conference on Friday, his response was pointed: “Thierry Henry has his opinions. He has not found the measurement of the fans’ angriness of 60,000 people straight away because he sits in the best seats in the stadium.”

When he is not working, Henry watches Arsenal from an executive box.

The situation is particularly awkward because Henry currently works at Arsenal, coaching their under-19s. Wenger finds the whole scenario unhelpful as his priority is to focus on a critical game. “The fans will be behind us, I don’t worry for that,” he added. Guardian Service

1 Gordon D’Arcy: There’s more to Saracens’ success than money
2 10-man Arsenal show their heart to rescue a point at Chelsea
3 As the UK tightens gambling laws Ireland still lags way behind
4 Seán Moran: Total disregard for schools as GAA votes one way and acts in another
5 Solskjær can’t guarantee Rashford will play again this season
Real news has value SUBSCRIBE